Clinicians often have difficulties diagnosing patients with subtle phenotypes of Noonan syndrome phenotypes. Facial recognition technology can help in the identification of several genetic syndromes with facial dysmorphic features, especially those with mild or atypical phenotypes. A patient visited our clinic at 5 years of age with short stature. She was administered growth hormone treatment for 6 years, but her growth curve was still below the 3rd percentile. She and her mother had wide-spaced eyes and short stature, but there were no other remarkable features of a genetic syndrome. We analyzed their photographs using a smartphone facial recognition application. The results suggested Noonan syndrome; therefore, we performed targeted next-generation sequencing of genes associated with short stature. The results showed that they had a mutation on the gene known as the pathogenic mutation of Noonan syndrome. Facial recognition technology can help in the diagnosis of Noonan syndrome and other genetic syndromes, especially in patients with mild phenotypes.

In this report, we present a case of Noonan syndrome diagnosed and confirmed with the help of the smartphone facial recognition software known as FACE2GENE.

A 5-year-old girl was referred to pediatric endocrinology out-patient clinic due to short stature. She was born at 41+2 weeks of gestation by cesarean section. She is the firstborn in the family and was delivered after a normal pregnancy with no birth injury. At birth, her weight was 3,270 g (10–50th percentile), and her length was 47.6 cm (3–10th percentile). Her height began to fall below the 3rd percentile from when she was 3 years old. Her mother’s height was 147 cm, her father’s height was 173 cm, and the mid-parental height was 153.5 cm. There was no other significant familial history. She had no history of developmental delay or intellectual disability. Basal blood tests including complete blood count, chemistry/electrolyte panel and thyroid function tests were within normal range. Chromosome analysis revealed 46, XX karyotype, so we excluded Turner’s syndrome. However, insulin growth factor-1 was low at 56.75 ng/mL (reference values for girls at this age: 3rd percentile 70.2 ng/mL, 10th percentile 115.9 ng/mL) and her bone age was 3.5 years old according to Greulich–Pyle method which is slightly delayed for her chronologic age. We performed the growth hormone (GH) stimulation test with L-dopa and insulin. The peak GH levels in the L-dopa provocation test and the insulin provocation test were 14.78 ng/mL and 9.07 ng/mL, respectively. Under the diagnosis of idiopathic short stature, we started the GH treatment. She continued to receive synthetic GH subcutaneously on a daily basis for 6 years, but her growth curve still remained below the 3rd percentile (Fig. 1).

At the age of 11 years and 4 months, she visited our clinic with her mother. She closely resembled her mother, and they both had wide-spaced eyes and short stature which are characteristic of Noonan syndrome. However, there were no other remarkable dysmorphic features, so we analyzed photographs of her face and her mother’s face using a smartphone facial recognition application known as FACE2GENE after obtaining parental and patient consent. The result of the analysis suggested that they have Noonan syndrome (Fig. 2), so we performed genetic analysis.

We collected blood sample from the patient and performed genetic analysis using targeted next-generation sequencing of genes associated with short stature. These genes analyzed including , , , , , , , , , , and.

We confirmed Noonan syndrome based on the results of the genetic tests and further performed work-up for other problems that may accompany Noonan syndrome. Physical examination showed that she has no chest or spine deformities. We performed blood coagulation test, and polar body morphology assessment to check for hematological problems, and the results were within normal limits. There was no evidence of cardiomegaly or other cardiac disorders based on chest X-ray and echocardiography. After genetic confirmation of Noonan syndrome, we adjusted the dose of GH replacement from 0.041 mg/kg/day to 0.055 mg/kg/day and the growth velocity after dose adjustment increased from its value before dose adjustment (from 4.3 cm/yr to 7.6 cm/yr) (Fig. 1). We planned regular follow-up assessments of her growth and development. We also planned to annually check for dental, ophthalmological, cardiac, and hematological problems associated with Noonan syndrome.

Diagnosis of Noonan syndrome can be difficult because its phenotypes are highly variable and can change with age [7]. Genetic heterogeneity can cause clinical presentations to vary according to mutations [8,9]. Facial analysis technology can be useful in the identification of syndromes with dysmorphic features, especially in patients with atypical presentations [7].

Most studies of Noonan syndrome phenotype are based on European cohorts, but there are relatively fewer studies on non-European populations. Furthermore, studies and guidelines on multiple ethnic cohorts and country-specific data are limited [7]. In this patient, we used a face recognition software called FACE-2GENE. This application use technology known as DeepGestalt, a community-driven phenotyping platform collected tens of thousands of patient images and used to recognize hundreds of syndromes. FACE2GENE convert photos of all individuals into a de-identified digital data to protect patient information. Its use has been reported in many genetic syndromes such as Cornelia de Lange syndrome and Angelman syndrome. Since the application data of FACE2GENE is mainly based on European and American populations, there are some limitations to its use for Asian patients. Therefore, further studies on the correlation and usefulness of FACE2GENE in Asian populations and more specific data applicable to specific ethnic groups are necessary [6].

The long-term benefits of GH replacement in patients with Noonan syndrome are not clear. Such lack of clarity can foster confusion among clinicians and lead to non-uniform treatment plans even in the same country [10]. In a recent study, the importance of early diagnosis and timely initiation of GH treatment was highlighted as early administration of long-term GH treatment was shown to positively affect height in adults [11].

In conclusion, due to the various clinical manifestations of Noonan syndrome, some patients with mild phenotypes may be underdiagnosed or misdiagnosed [7]. Facial recognition technology can help clinicians, especially those with limited experience, to identify and diagnose genetic syndromes with characteristic facial features, thereby facilitating early management of patients [6]. 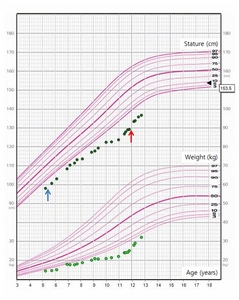 Growth chart of the patient. The start of growth hormone (GH) replacement (blue arrow). After adjusting the dose of GH replacement (red arrow), growth velocity increased compared with before changing the dose. 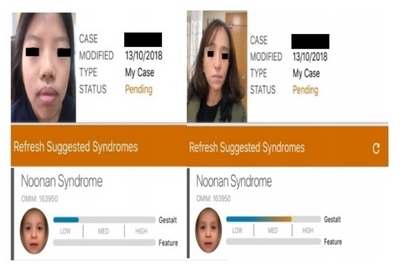 Pictures of the analysis of the patient’s face using a smart-phone facial recognition application (FACE2GENE). 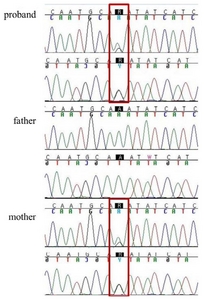 Sanger sequencing of the proband and her mother showing a missense variation (c.922A>G) resulting in a p.N308D mutation of the gene.