Hypotonia, Ataxia, and Delayed Development Syndrome (HADDS; OMIM 617330) is an extremely rare human neurodevelopmental syndrome caused by a heterozygous loss-of-function mutation in the gene on chromosome 10q26. Patients show congenital hypotonia, structural brain malformations, ataxia, and genitourinary abnormalities [1]. HADDS was first described in 2016. Its incidence rate is unknown; however, ~33 patients have been reported to carry a mutation to date, which has been identified by whole exome sequencing (WES) [1-5].

A 2-month-old male was referred to Medical Genetics Center, Asan Medical Center, Seoul, Korea due to hypotonia. He was born after 39 weeks of gestation to a 24-year-old mother, who had previously experienced 2 spontaneous abortions. Family history for developmental delay was rejected. His birth weight was 2.95 kg (10-50th percentile), height was 47.6 cm (10th percentile), and head circumference was 34 cm (10-50th percentile). He was admitted to the neonatal intensive care unit at birth due to perinatal distress. Dysmorphic features were reported at admission, such as a long and triangular face, hypertelorism, low set ears, high nasal bridge, broad nasal tip, short anteverted nostrils, deep philtrum, and downturned corners of the mouth. In addition, short stature, hypotonia, constipation, micropenis, cryptorchidism, VUR, and clubfoot were noted.

At 3 months of age, a left VUR grade V with ureterovesical stenosis was observed following urinary tract infection (Fig. 1). At 6 months of age, he was unable to control his head. In addition, his muscle tone was decreased, with a normoactive deep tendon reflex. Brain magnetic resonance imaging (MRI) showed prominent retrocerebellar CSF spaces with suspected vermian hypoplasia (Fig. 2). His karyotype is 46, XY; chromosomal microarray did not find any significant copy number variant.

At 9 months of age, ureteroneocystostomy was performed for left obstructive refluxing megaureter and bilateral orchiopexy for cryptorchidism. Strabismus, ataxic hand movement, and insensitivity to pain were noted. At that time, the patient’s height was 65 cm (<3rd percentile), his head circumference was 44.5 cm (10-50th percentile), and body weight was 6.9 kg (3th percentile).

Based on the multi-systemic clinical features, including global developmental delay, short stature, brain anomaly, genitourinary abnormality, and normal chromosomal microarray results, WES was performed, as described previously. Informed consent was obtained from the parents. This study was approved by the Institutional Review Board for Human Research of Asan Medical Center (IRB number 2017-0988).

WES identified a novel mutation, c.589A>G (p.Asn197Asp), in the gene (Fig. 3). analysis predicted that p.Asn197Asp would alter protein function (MutationTaster; Polyphen-2 and SIFT), which has not been reported in a general population cohort (https://gnomad.broadinstitute.org/). This variant was classified as “uncertain significance”, according to the American College of Medical Genetics and Genomics guidelines [6]. His parents did not carry the mutation. This led to diagnostic confirmation of HADDS.

Echocardiography revealed a retroaortic left innominate vein with hemiazygos inflow and no other structural cardiac anomaly. Anticholinergic and laxative drugs were prescribed for areflexic bladder and constipation, respectively.

At the latest evaluation at 2 years and 10 months of age, developmental status was severely delayed despite comprehensive rehabilitation treatment. DDST scores were 7, 6, 6, and 9 months in each personal-social, fine motor-adaptive, language, and gross motor domain, respectively.

is located on chromosome 10q26.3; it encodes a member of the collier/olfactory-1/EBF (COE) family of transcription factors that regulate neurogenesis and differentiation [8]. EBF3 is expressed in Cajal-Retzius (CR) cells, which are important for the development of cerebral cortex. Chiara et al. [9] reported that this protein controls the migration of CR cells arising in the brain cortex. The pathogenic mechanism of mutations is loss-of-function, which results in reduced EBF3 activity and subsequent aberration of neurodevelopment [4]. Moreover, is expressed in the urinary system, reproductive system, and metanephros [10]; therefore, its deficiency is associated with urogenital abnormalities.

To date, 27 out of 33 patients who have been diagnosed with HADDS with a proven mutation exhibit a mutation in COE1 DNA binding domain. In this domain, 11 patients showed a mutation in the zinc finger motif, which is crucial for zinc coordination and positioning residues for DNA binding. These mutations are expected to decrease the affinity of mutant to DNA, resulting in aberrant DNA binding [2]. Interestingly, only one patient has been reported to carry an mutation in the transactivation domain mutation [5]. Two patients were identified with a mutation in the Ig-like, plexins, transcription factor and helix-loop-helix domains [3]. It is possible that aberrant -mediated transcription in the muscular systems could lead to hypotonia, atonic bladder, loss of bladder control, and other phenotypes observed in patients. The novel missense mutation of our patient, p.Asn197Asp, is located in the DNA binding domain [11].

In conclusion, this is the first report of a case with HADDS in the Korean population caused by a mutation, c.589A>G (p.Asn197Asp). The identification of more cases will help to understand this extremely rare genetic disease, which will improve patient care. 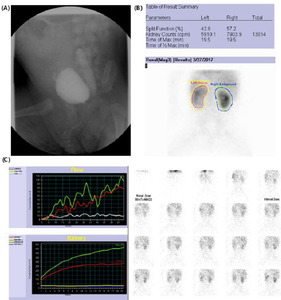 Fig. 1. (A) Voiding cystourethrogram showed left vesicoureteral reflux grade V at 3 months of age. (B) Tc-99m MAG3 renal scan showed decreased perfusion of left kidney. (C) The cortical transit time of the left kidney is delayed compared with the right kidney. Pelvicalyceal retention is present in both kidneys, which means delayed excretion of the left kidney. 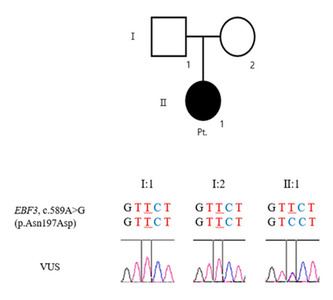