Abstract
The Say–Barber–Biesecker–Young–Simpson variant of Ohdo syndrome (SBBYSS) (Online Mendelian Inheritance in Man #603736) is a rare autosomal dominant disorder and clinically features blepharophimosis with ptosis, a mask-like facial appearance, cryptorchidism, congenital heart defect, long thumbs/great toes, and thyroid dysfunction. The etiology of SBBYSS has been shown to be due to heterozygous KAT6B gene mutation. Here we report a case of a neonate with SBBYSS identified a novel mutation in KAT6B gene. The patient showed typical dysmorphic facies, cryptorchidism with micropenis, overriding fingers, and long thumbs and toes at birth. He had also hypothyroidism, large atrial septal defect, and sensorineural hearing loss. The next generation sequencing identified a heterozygous novel variant, c.5206C>T (p.Gln1736Ter) in KAT6B gene. At the 9 months of age, he underwent patch closure for atrial septal defect. Until the 12-month follow-up, he was under-developed.
Keywords : Say–Barber–Biesecker–Young–Simpson syndrome, KAT6B protein.

Say–Barber–Biesecker–Young–Simpson syndrome (SBBYSS; Online Mendelian Inheritance in Man [OMIM] #603736), which overlaps with the originally described Ohdo syndrome, is an autosomal dominant disorder clinically recognizable at birth. Clinical features are blepharophimosis with ptosis, mask-like facial appearance, long thumbs/great toes, cryptorchidism, congenital heart defect, and thyroid dysfunction [1]. The etiology of SBBYSS has been recognized as a heterozygous mutation of the gene. encodes a highly conserved histone acetyltransferase and regulates the expression of multiple genes that are important for early development, including development of the skeleton and nervous system [2]. This is essential for proper growth and development, and its role in human genetic diseases is increasingly recognized disorders include SBBYSS and genitopatellar syndrome (GPS; OMIM #606170). GPS is another phenotype of disorders with characteristic features including patellar hypoplasia, flexion contractures of the limbs, renal and genital anomalies, microcephaly, agenesis of the corpus callosum, and intellectual disability [3]. Although the prevalence of SBBYSS and GPS is still not accurately known, some individuals with molecularly confirmed disorders have been reported in the literature, including 20% with GPS, 64% with SBBYSS, and 14% described as having an intermediate phenotype [4]. The pathogenic variant spectrum from individuals includes 39% substitutions, 39% small intragenic deletions, 18% small intragenic duplications and 3% small intragenic deletions associated with an insertion [4], which results in most of frameshift and nonsense mutations [1,5]. Here we report a neonate diagnosed typical SBBYSS caused by a pathogenic nonsense novel variant of gene. This study was approved by the Institutional Review Board (IRB) of Chungnam National University Hospital (IRB no. CNUH 2021-11-009). The written informed consent was waived by IRB.

A male newborn was the first baby of healthy noncon­sanguineous parents. Family history was unremarkable and there were no antenatal problems. Amniocentesis with fetal chromosomal analysis was normal. He was born via vaginal delivery at 40+4 weeks’ gestation at the local obstetric clinic. He was transferred to our institute for multiple anomalies at birth. His weight, height, and head circumference were 2,720 g (3rd-10th percentile), 47.5 cm (3rd-10th percentile) and 34 cm (10th-50th percentile), respectively. He showed weak-cry and had generalized low muscle tone. Apgar scores at 1- and 5-minute were 7 and 9, respectively. Physical examination revealed hypertelorism, low set ear with underdeveloped antihelix, low nasal bridge, upward nostril, micrognathia, small scrotum with micropenis, overriding fingers, and long thumbs and toes (Fig. 1A, C, and D). The testes were not palpable in bilateral scrotums. Pelvic sonography performed at admission showed intra-abdominal testes. Simple cysts in both kidneys were seen in ultrasonography. Echocardiography showed a large atrial septal defect (ASD). There were unremarkable findings in brain sonography. Sensorineural hearing loss in the left ear was suspicious by automated auditory brainstem response test.

On the 7th and 14th day after birth, he experienced two events of atrial flutter, and flecainide was administered. No additional attacks were developed until 4 month and medication was stopped. Free thyroxine and thyroid-stimulating hormone levels measured at the 14 days old were 0.58 ng/dL and 445.18 μIU/mL, respectively. Thyroid scans showed diffuse goiter with significantly increased uptake in both lobes. Levothyroxine was administrated after the diagnosis of congenital hypothyroidism. His karyotyping was 46, XY and chromosomal microarray revealed no deletions or duplications. For underlying causes of the multiple abnormalities, we performed targeted exome sequencing by hereditary endocrine disorder panel (111 genes) and hereditary skeletal disorder panel (362 genes). A heterozygous nonsense mutation, c.5206C>T (p.Gln1736Ter), in exon 18 of gene (NM_012330.3) was identified and confirmed Sanger sequencing (Fig. 2). The c.5206C>T is a mutation at an evolutionarily conserved position in eutherian mammals, which determined by comparative genomics with alignments from Ensembl Genome Browser (https://asia.ensembl.org). And this allelic mutation was not inherited from his parents, and was also not identified in control populations and was predicted as damaging by in-silico analysis (Sorting Intolerant from Tolerant and Polyphen-2). So, we concluded that this mutation is a novel pathogenic variant according to American College of Medical Genetics classification [6].

He was discharged at the age of one month. Then, at the age of 4 months, he was confirmed unilateral sensorineural hearing loss in the auditory brain threshold test. Clinical findings revealed an immobile mask-like face, a bulbous nasal tip, and severe blepharophimosis (Fig. 1B). He underwent patch closure for ASD at the age of 9 months. At the same time, the Denver developmental screening test was 5.9 months, 5.6 months, 4.3 months, and 5.4 months for personal-social, fine motor-adaptive, language, and gross motor, respectively. In the follow-up 12 months later, his weight, height, and head circumference were all less than 3rd percentile. He was undergoing rehabilitation treatment because of developmental delay. He is scheduled for surgery of cryptorchidism.

The gene located in the 10q22.2 region of DNA encodes lysine acetyltransferase 6B. Exome sequencing has enabled identification of heterozygous variants in as etiology of both GPS and SBBYSS, a variant of Ohdo syndrome [4]. Ohdo syndrome was first described as a genetic condition characterized by intellectual disability in association with congenital heart disease and dysmorphisms [7]. Subsequently, Young and Simpson reported a more severe phenotype later referred to as the SBBYS variant of Ohdo syndrome, or SBBYSS [8-10]. GPS and SBBYSS have been described as distinct disorders with respect to clinical findings but with several overlapping features including global developmental delay/intellectual disability, hypotonia, genital abnormalities, congenital heart defects, hearing loss, and thyroid anomalies [11]. Lemire et al. [5] proposed that the features listed in Table 1 should raise suspicion for disorder. Individuals with two major features or one major feature and two minor features are likely to have a disorder. The major features of SBBYSS are characterized by blepharophimosis, dacryostenosis, ptosis, a mask-like facial appearance and long thumbs/great toes. GPS is characterized by patellar hypoplasia/agenesis, agenesis of the corpus callosum, flexion contractures of the hips and knees, and club feet [12]. Mendez et al. [13] reported a newborn with the facial dysmorphisms and long thumbs/halluces as the main findings clearly suggested the diagnosis of SBBYSS. But he also had a corpus callosum agenesis, a typical feature of GPS. Another reported a boy that had a mutation previously reported in typical SBBYSS, but he also manifested severe developmental delay, as well as genital features and laryngomalacia requiring tracheostomy that confirmed to GPS [14]. Our patient had three major features like distinctive face, long thumbs/great toes, and bleopharophimosis without structural brain defects or respiratory problems suggesting the SBBYSS. Furthermore, he had some minor features such as cryptorchidism, hypothyroidism, sensorineural hearing loss, and congenital heart defect.

Vlckova et al. [11] summarized genotype-phenotype correlations and classified 62 reported mutations into four groups. Group 1 mutation (codons 1 to 1205) seems to produce no protein due to nonsense-mediated RNA decay and is associated with mild form of SBBYSS [15]. Group 2 (codons 1205 to 1350) produces lacking a significant part of the acidic (A) domain and the whole transcription activation (TA) domain and is associated with GPS. Group 3 (codons 1350 to 1520) is retaining a larger part of the A domain but lacking the TA domain, and most cases (5/7) with GPS/SBBYSS mixed phenotypes are included in this group. Group 4 (codons 1520 to 2073) is retaining the whole A domain but lacking the TA domain and cause almost exclusively SBBYSS. The genotype (p.Gln1736Ter) of our patient was included in mutation group 4. It is a novel mutation in gene that has not been reported yet (http://gnomad.broadinstitute.org). While disorders are inherited in an autosomal dominant manner, most individuals with a disorder have had a pathogenic variant including ours. Kim et al. [16] reported the familial inherited mutation of the variant (c.2292C>T, p.His767Tyr) causing relatively mild disease in three individuals with SBBYSS. In Korea, two cases have reported mutation including GPS (NM_012330.3: c4543C>T, p.Gln1515Ter) and familial SBBYSS mentioned above [16,17].

In summary, SBBYSS is a rare disease characterized by multiple congenital anomalies and developmental delay and a few cases have been reported in worldwide. In patients with these phenotypes, sequencing can be performed to confirm the diagnosis. We identified a novel mutation in gene by targeted exome sequencing and it is meaningful addition to the literature. After the diagnosis, follow-up is necessary because developmental delay, hearing loss, and hypothyroidism may be accompanied.

This work was supported by research fund of Chungnam National University. 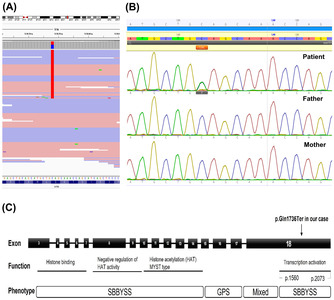 Fig. 2. Genomic analysis of KAT6B. DNA sequence showed a heterozygous mutation of c.5206C>T (p.Gln1736Ter) in exon 18 (A), partial electrophenograms after Sanger sequencing results of the patient, his father and mother (B), and representative diagram of gene (C); exon, functional region, and genotype-phenotype correlations based on Vlckova M et al. [11] and Radvanszky J et al. [15].

Summary of clinical manifestations in patients with GPS or SBBYSS