Because next generation sequencing techniques, including chromosomal microarray and whole exome sequencing (WES), enables successful identification of various genomic variants in undiagnosed syndromic cases with developmental delay in a time- and cost-effective manner, the importance of exome sequencing for identifying the genetic etiology is gradually being emphasized [9,10]. Based on the data from multiple studies and the Deciphering Developmental Disorders Study database, more than 100 sequence and copy number variants of YY1 have been identified among patients with syndromic developmental delay [1,2,11-14]. Here, we report on a novel missense variant of , identified by WES, in an infant with a developmental delay. Owing to early diagnosis of GADEVS at infancy, it was easier for the patient to access intensive rehabilitation therapy that improved her cognitive outcome. To the best of our knowledge, this is the first report of GADEVS in the Korean population, which can help expand the clinical and molecular spectra of GADEVS.

A 7-month-old girl visited the outpatient clinic for children because of developmental delay. The patient was born at 39+5 gestational weeks with a body weight of 3,140 g (–0.15 standard deviation [SD]) at birth. She was the only child of non-consanguineous, healthy Korean parents with no family history of developmental delays or multiple congenital abnormalities. Prenatal examinations did not reveal any abnormalities. She presented a mild dysmorphic facial appearance including facial asymmetry, micrognathia, and low-set ears. The girl’s height was 71.2 cm (1.7 SD), weight was 8.5 kg (0.9 SD), and head circumference was 43 cm (0.2 SD). She showed no apparent neurological abnormalities, such as change in muscular tone, increased deep tendon reflexes, or pathologic reflexes. Results of laboratory tests, including blood chemistry and endocrine tests as well as the results of tandem mass spectrometry screening of inborn errors of metabolism were normal. Results of abdominal ultrasound, echocardiography, skeletal survey, and brain magnetic resonance imaging at the age of 9 months were also normal. Audiometry revealed a mild sensorineural hearing loss in the right ear. An assessment using the Bayley Scales of Infant and Toddler Development 3rd edition (Bayley-III) at the age of 7 months demonstrated a mild degree of global developmental delay, especially in gross motor function.

To explore the possibility of a genetic syndrome, we performed genetic tests, such as chromosomal microarray and WES, to identify the underlying genetic defect. Chromosomal microarray revealed a normal karyotype of 46, XX, without copy number variation. WES identified a novel heterozygous missense variant of c.1220C>T (p.His407Arg) in the gene (Fig. 1). The parents did not have this variant (Fig. 1). This missense variant was validated by Sanger sequencing and was expected to damage protein structure, function, or protein–protein interaction (Table 1) [16]. This variant has not been reported in a large population cohort (The Genome Aggregation Database, the Exome Aggregation Consortium, 1000 Genomes, and the Exome Sequencing Project) and was classified as “likely pathogenic” by the American College of Medical Genetics and Genomics/Association for Molecular Pathology guidelines [17].

Currently, the patient is undergoing various rehabilitation treatments twice a week, such as occupational therapy, neurodevelopment treatment, and activities of daily living.

GADEVS, also known as YY1 haploinsufficiency syndrome, was first reported in 2017 by Gabriele et al. [1]. Since was considered a candidate gene for syndromic intellectual disability with intrauterine growth retardation and dysmorphic facial appearance on the basis of trio exome sequencing conducted by Vissers et al., 26 cases have been reported [1,2,11-13]. YY1 is a zinc finger containing multifunctional transcription factor that regulates transcriptional activation and repression in nervous systems [3]. Loss of function of YY1, which is caused by deletion, protein-truncating, or missense mutation affects, neural development, neuronal function, and developmental myelination [1,3,18]. YY1 was also involved in the tumorigenesis of various tumors mediated via p53 downregulation and may serve as a marker for diagnosis, treatment, and prognosis [5]. Furthermore, the targets differentially regulated by YY1 include several genes associated with neurodevelopmental disorders, such as , and [1,7]. Genotypes of GADEVS include five truncating mutations, eight mutations resulting in a missense change, or 13 deletions of and other neighboring genes [1,2,12,13]. In the current study, the missense variant is located in the ultimate exon, where most of the pathogenic variants have been described [1,13].

We identified a de novo missense variant of YY1, which was classified to be likely pathogenic, in an infant with mild developmental delay and subtle facial dysmorphism. Through this case, we expect to expand the clinical and genetic spectra of GADEVS that might be an unidentified cause of syndromic features with developmental delay and facial dysmorphism. 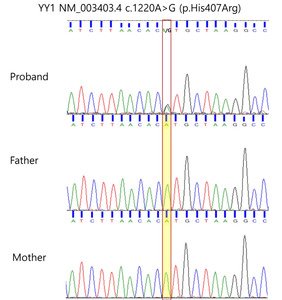 Fig. 1. Sanger sequencing of the proband and her parents. Sequencing showed a de novo novel pathogenic variant of the gene (c.1220A>G; p.His407Arg).

Details of the variant identified in the gene