Abstract
We experienced a case of Xq deletion -- 46,X,del(X)(q22.3) -- detected by abnormal noninvasive prenatal screening, subsequently diagnosed by amniocentesis. Genetic counseling was a challenge because there are few reports of prenatal diagnosis of Xq deletion. In each female cell, one X chromosome is inactivated at random early in development, and there may be a preferential inactivation of the abnormal X chromosome. But some proportions of genes escape inactivation. The most common manifestation in women with Xq deletion is primary or secondary ovarian failure. Critical regions for ovarian function may be located at the long arm of the X chromosome. But, the onset and the severity of ovarian failure may vary with diverse, intricate factors. We anticipate that noninvasive prenatal screening can identify the broader range of chromosomal or genetic abnormalities with the advances in technology and analytic methods. We report our case with a brief review of the literature.
Keywords : Xq deletion, Prenatal diagnosis, Noninvasive prenatal screening, Amniocentesis.

Noninvasive prenatal screening (NIPS) is now being used widely for the prenatal detection of fetal chromosomal aneuploidies. We experienced a case of Xq (the long arm of the X chromosome) deletion detected by abnormal NIPS, subsequently diagnosed by amniocentesis. There are few reports of prenatal diagnosis of Xq deletion [1,2], and genetic counseling was a challenge because the information from postnatal diagnosis usually due to clinical problems may be biased. The most common manifestation in women with Xq deletion is primary or secondary ovarian failure [3,4]. However, the onset and the severity may vary with diverse, intricate factors, such as the location of the deletion and the issues concerning the X chromosome inactivation, making counseling a demanding task. We report our case with a brief review of the literature.

A 40-year-old woman, G4P1, visited our hospital for prenatal care at 11 weeks and 3 days of gestation. Her prior pregnancies were two spontaneous abortions and one uneventful term cesarean delivery. Due to the two spontaneous abortions and advanced age, she and her husband previously had karyotyping, which revealed that both were normal. Prenatal ultrasound showed no abnormal findings; the nuchal translucency was 1.3 mm, and crown-rump length was 5.31 cm (compatible with 12 weeks of gestation). We offered the options of screening or diagnostic tests for prenatal aneuploidy detection, and she opted for the NIPS. The NIPS result was “Positive: aneuploidy detected. Results consistent with the presence of a single X chromosome and no detectable Y chromosome (Monosomy X)” (VerifiTM Plus Prenatal Test; Illumina, Foster City, CA, USA).

On her next visit, we counseled her and her husband about the result, and they decided to have amniocentesis for a definitive diagnosis. At 16 weeks and 5 days, she had amniocentesis. Ultrasound showed no abnormality, and the fetus was female. After four days, quantitative fluorescent-polymerase chain reaction (QF-PCR) was reported to be negative for trisomies 21, 18, 13, and sex chromosome aneuploidy (EONE Laboratories, Incheon, Korea). But, two weeks after amniocentesis, the karyotype result came out to be “46,X,del(X)(q22.3)” (EONE Laboratories) (Fig. 1). The counseling was difficult because such cases are infrequent, and there may be a varied range of clinical presentations due to the intricate issues such as the X chromosome inactivation. We counseled her and her husband with the available data about the possibility of premature ovarian failure, and we offered the consultation to a tertiary center for further genetic counseling. After that, we could not follow up with the patient. We heard by telephone that the fetus had been aborted.

We experienced a case of Xq deletion detected by abnormal NIPS, subsequently diagnosed by amniocentesis. Genetic counseling was a challenge because there are few reports of prenatal diagnosis of Xq deletion and the clinical manifestations may be heterogeneous even with the same chromosomal abnormality.

The genes of Xi (the inactive X chromosome) are not utterly silent, and some proportions of genes escape inactivation. So, in the 46,XX woman, although her one X chromosome is inactivated in each cell, the function of some genes escaping inactivation may be needed for normal development free from the characteristics of Turner syndrome. Carrel and Willard [6] examined that 15% of Xi genes escaped inactivation in all their samples of human female fibroblast-based cells, and another 20% of Xi genes were not inactive in some samples. The genes expressed from the Xi were clustered more to the distal portion of Xp (the short arm of the X chromosome), which comprises the pseudoautosomal region. On the whole, the Xq genes escaped inactivation to a lesser degree. We can take account of this information during the genetic counseling, but we may have a false sense of security without more specific evidence. Furthermore, there was a cluster of Xi-expressed genes within Xq28, which has different evolutionary origins (stratum 2b) than the rest of Xq (stratum 1) [6-8].

The ‘critical region’ hypothesis for ovarian function originated from the finding that among balanced X-autosome translocation cases, most infertile women had breakpoints in the segment Xq13-26 [9-11]. Some people tentatively classified the critical regions as POF1 (Xq21.3-27) and POF2 (Xq13.3-21.1) [2,12,13]. And others said that the preservation of a distal portion somewhere in Xq26-28 might also be important for normal ovarian function [2,14-16]. Most deletions arising from Xq13 (or proximal Xq21) are associated with primary amenorrhea, so that this region seems to be important for ovarian maintenance [4]. Meanwhile, secondary amenorrhea is more common in more distal Xq deletion, such as premature ovarian failure, which is frequently reported as familial cases [4]. Besides, fragile X syndrome, associated with premature ovarian failure in the premutation stage, has its gene (FMR1) at Xq27.3 [13]. Considering the large deletion size of our case comprising the POF1 region, the baby might have a possibility of premature ovarian failure. Still, the onset and the severity might vary with intricate genetic and epigenetic factors.

Moreover, there is also a technical limitation to reading the chromosomal bands. An interesting report by Krauss et al. [5] was published in the New England Journal of Medicine in 1987. The karyotype by chromosome banding was 46,XXq-, consistent with a deletion of Xq22.2-qter. However, DNA hybridization by ten X chromosome probes using restriction fragment length polymorphisms and northern blotting revealed two copies of the Xq27-28 loci. In situ hybridization showed that the case had an interstitial deletion rather than a terminal deletion. So, the probable final diagnosis was del(X)(pter-q21::q27-qter).

We requested the raw data of the QF-PCR test of our patient from EONE Laboratories because it may give some information. QF-PCR performs multiplex PCR for short tandem repeat (STR) markers and detects the fluorescent products of the target sequence after capillary electrophoresis. If the sizes of the fluorescent products from two allelic chromosomes are different, the result shows two heterozygous peaks (height or area 1:1). But, if the result shows one homozygous peak, it is uninformative because there are two possibilities: (1) the sizes of the fluorescent products from two chromosomes may be identical by chance (disomy); or (2) there may be one fluorescent product from one chromosome (monosomy). Table 1 lists the QF-PCR result of STR markers on chromosome X or Y in our patient. This result is compatible with the terminal Xq deletion. However, it does not exclude the possibility of interstitial deletion because the STR markers on the distal Xq (XHPRT, DXS1187) showed the uninformative pattern. Therefore, we may need other molecular techniques, such as comparative genomic hybridization, to evaluate the location of the deletion more accurately.


Cell-free fetal DNA is now being used widely for the prenatal detection of fetal chromosomal aneuploidies. This technique began the clinical application to screening major trisomies (i.e., trisomies 21, 18, and 13). The scope of screening has extended to the sex chromosomal aneuploidies and other rare autosomal trisomies. Many NIPS services report the results about some microdeletions, although they are not recommended yet [17]. Contemporary commercial NIPS services use diverse techniques and their own algorithms. So, the partial loss of chromosomal material, such as in our case, may or may not be reported to be abnormal. Recently, a nationwide report from Belgium was published [18]. Belgium is using the NIPS as a first-tier screening test, supported and reimbursed by the government. They reported 153,575 NIPS results, and they found 109 cases suggestive of the presence of a segmental imbalance. Among them were two cases of Xq deletion; (1) one case of a whole Xq arm deletion, not confirmed by additional invasive prenatal diagnosis, and (2) one case of interstitial deletion, Xq25q27.3, confirmed by the additional test. Furthermore, we anticipate that NIPS can identify the broader range of chromosomal or genetic abnormalities with the advances in technology and analytic methods. 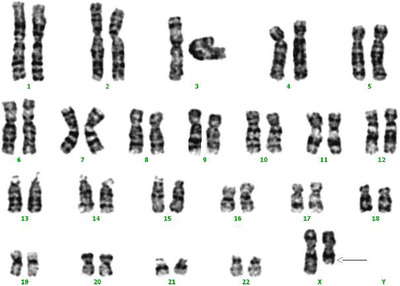