Abstract
Autosomal recessive spinocerebellar ataxia 20 (SCAR20; OMIM #616354) is a recently described disorder that is characterized by ataxia, intellectual disability, cerebellar atrophy, macrocephaly, coarse face, and absent speech. It is caused by lossof- function mutations in SNX14. To date, all cases with homozygous pathogenic variants have been identified in consanguineous families. This report describes the first Korean cases of SCAR20 family caused by homozygous variants in SNX14. Two siblings were referred to our clinic because of severe global developmental delay. They presented similar facial features, including a high forehead, long philtrum, thick lips, telecanthus, depressed nasal bridge, and broad base of the nose. Because the older sibling was unable to walk and newly developed ataxia, repeated brain magnetic resonance imaging (MRI) was performed at the age of 4 years, revealing progressive cerebellar atrophy compared with MRI performed at the age of 2 years. The younger sibling’s MRI revealed a normal cerebellum at the age of 2 years. Whole-exome sequencing was performed, and homozygous variants, such as c.2746-2A>G, were identified in SNX14 from the older sibling. Sanger sequencing confirmed homozygous SNX14 variants in the two siblings as well as a heterozygous variant in both parents. This report extends our knowledge of the phenotypic and mutational spectrum of SCAR20. We also highlight the importance of deep phenotyping for the diagnosis of SCAR20 in individuals with developmental delay, ataxia, cerebellar atrophy, and distinct facial features.
Keywords : SNX14 protein, Cerebellar ataxia, Developmental disabilities.

Autosomal recessive spinocerebellar ataxias are a heterogeneous group of neurological disorders that in most cases present with early-onset progressive cerebellar atrophy or hypoplasia, gait imbalance, and poor coordination [1]. This group comprises a large number of rare diseases, with Friedreich ataxia being the most common, followed by ataxia with oculomotor apraxia or ataxia-telangiectasia [2]. The precise etiology and underlying mechanism have only been elucidated in a small group of autosomal recessive cerebellar ataxias.

Autosomal recessive spinocerebellar ataxia 20 (SCAR20; OMIM #616354) is a recently described disorder that is characterized by progressive early-onset cerebellar atrophy, ataxia, severe developmental delay, coarse facial features, macrocephaly, and absence of speech. SCAR20 is caused by loss-of-function mutations in , which encodes a member of sorting nexin protein family that is primarily localized in the endoplasmic reticulum [3,4]. To date, only 20 pathogenic variants have been identified in 49 individuals [3-8]. All 19 homozygous variants were identified from 25 unrelated consanguineous families. In this report, we describe a Korean family with two siblings with SCAR20 who are carrying homozygous variants in . The research protocol was approved by the Ethics Committees of Kyungpook National University Hospital (No. 2021-03-009).

A 2-year-old girl (II:1) was referred to our pediatric neurology clinic because of delayed developmental milestones. She attained head control at 3 months and could roll over at 7 months, but at 2 years, she was unable to sit alone, walk, and speak meaningful words (the age of the patients was described as corrected age for those under the age of 2 years). She was born at 34 weeks of gestation with a weight of 2,080 g after an eventful pregnancy from non-consanguineous healthy Korean parents. Her family had no history of neurodevelopmental disorders. Her height, weight, and head circumference were 86 cm (25%-50%), 12.1 kg (50%-75%), and 47 cm (25%-50%), respectively. Her physical examination was unremarkable, apart from the observation of distinctive facial features, including high forehead, long philtrum, thick lips, telecanthus, depressed nasal bridge, and broad base of the nose (Figs. 1A, B). Her neurologic examination revealed a decreased deep tendon reflex. Metabolic tests, including levels of plasma amino acid, urine organic and amino acids, mucopolysaccharides, and oligosaccharides, were normal. Karyotype, chromosomal microarray and methylation-specific test for Prader–Willi syndrome, and genetic test for gene were also normal. Brain magnetic resonance imaging (MRI) revealed a delayed myelination of white matter for her age (Fig. 2A). At the age of 4 years, she was brought to our clinic again because she was still unable to walk alone and speak meaningful words. In the Bayley Scales of Infant Development-Second Edition at 4 years of age, mental developmental index and psychomotor developmental index scores were both 50, suggestive of moderate developmental delay. She also showed a decreased deep tendon reflex and ataxia. Follow-up brain MRI was performed, which revealed diffuse cerebellar atrophy (Fig. 2B).

Her younger sibling (II:2) was referred for the evaluation of global developmental delay at 24 months of age. She was unable to sit, crawl, or speak meaningful words. She was born at 34 weeks of gestation, with a weight of 1,810 g. After birth, noninvasive ventilation was required due to mild respiratory insufficiency but was stopped within a few days. At 6 months of age, she underwent adductor tenotomy and close reduction due to developmental dysplasia of the hip. At 2 years of age, examinations revealed that her height, weight, and head circumference were 81.5 cm (50%-75%), 12.1 kg (50%-75%), and 50.5 cm (>97%), respectively. Her neurologic examination was unremarkable. Similar to her older sibling, she presented with distinct facial features (Figs. 1C, D). Brain MRI, which was performed in the neonatal period, revealed multiple linear T1 high signal intensities on both periventricular areas, suggesting non-cavitary periventricular leukomalacia (Fig. 2C). Follow-up brain computed tomography at 24 months of her age revealed a relatively thin corpus callosum and prominent extra-axial fluid (Fig. 2D). Metabolic tests, including levels of plasma amino acid, urine organic and amino acids, mucopolysaccharides, and oligosaccharides, were normal. Chromosomal microarray was also normal. Whole-exome sequencing was performed for the older sibling (II:1) and the parents (I:1 and I:2) after obtaining written informed consent from the parents. The variant c.2746-2A>G was identified as homozygous variants in the older sibling and a heterozygous variant in both parents. Substitution at the splicing junction produces an abnormal splicing effect, which is expected to cause a loss of normal protein function via nonsense-mediated mRNA decay (PVS1). The variant c.2746-2A>G was identified in only one individual from the Genome Aggregation Database, gnomAD v.2.1.1 (allele frequency, 1/245460) (https://gnomad.broadinstitute.org/) and was absent among the Korean population (http://coda.nih.go.kr/coda/KRGDB/index.jsp) (PM2). Sanger sequencing of was conducted for the two siblings and the parents. The results showed that the siblings had homozygous variants and that the non-consanguineous parents had a heterozygous carrier status (PM3 and PP1) (Fig. 3). Both of the siblings’ phenotype was consistent with SCAR20 (PP4). Based on the standards and guidelines of American College of Medical Genetics and Genomics and multiple lines of evidence, including prediction of loss-of-function variants, segregation analysis, allele frequency and phenotype compatible to the disease, the c.2746-2A>G variant in was classified as “pathogenic” [9]. Finally, the two siblings were diagnosed with SCAR20. Their gross and fine motor skills were slightly improved; however, to date, the older sibling is still unable to walk independently and speak meaningful words at 5 years of age and the younger sibling is unable to crawl and speak meaningfully at 28 months of age.

Herein, we report the case of a Korean family with two siblings with SCAR20 who are carrying homozygous splicing acceptor variants in . SCAR20, first described in 2014 in a Portuguese consanguineous family as a new syndrome, is characterized by severe intellectual disability, absence of speech, cerebellar atrophy, congenital hypotonia, coarse facial features, relative macrocephaly, and thick cranial vault [4]. The main clinical features of our cases were remarkably similar to those with SCAR20 reported previously [4,5]. In a review of 29 patients with SCAR20, severe motor delay and intellectual disability were consistently noted in all patients. Two-thirds of these patients showed complete lack of verbal output at presentation. Additionally, skeletal abnormalities such as spinal deformities, pectus carinatum, brachydactyly and camptodactyly, epilepsy, and hearing loss were observed in some individuals [5]. The characteristic facial features of SCAR20 make it recognizable among the heterogeneous group of neurologic disorders that present early-onset cerebellar ataxia and intellectual disability. The distinct facial features of SCAR20, including telecanthus, wide and depressed nasal bridge, broad base of the nose, and long and deep philtrum, have been noted in all patients reported to date. Similarly, in our cases, we could diagnose SCAR20 due to facial dysmorphism, which is compatible with SCAR20, although the younger sibling has not shown progressive cerebellar atrophy on neuroimaging evaluation at 2 years of age. Similar to our report, one patient with SCAR20 did not present cerebellar atrophy or hypoplasia at 1 year of age [5]. This might be explained by the early diagnosis before the progression of cerebellar atrophy.

The tissue distribution and cellular function of SNX14 protein have been recently investigated. mRNA is expressed in all human fetal and adult tissues, but at greater levels in the cerebellum, increasing steadily from the embryonic to the postnatal stage [3,4]. Limited data from humans and dogs with SCAR20 indicate that Purkinje cells are particularly vulnerable to degeneration [3,10]. Loss of SNX14 protein is considered to disrupt autophagy, as observed in many neurodegenerative and neurodevelopmental disorders [3,7] Some studies suggested that loss of SNX14 leads to defect in neutral lipid metabolism homeostasis at the endoplasmic reticulum [7,11]. This metabolic defect may reflect the fundamental underlying cause of the disease, which potentially explains the syndromic presentation of SCAR20. Further studies are required to elucidate the mechanisms underlying Purkinje cell loss and the associated cerebellar degeneration as well as identify the cellular pathology, which may provide a promising therapeutic target for alleviating the clinical symptoms of SCAR20.

To date, 19 homozygous and two compound heterozygous pathogenic variants in , with all being highly deleterious, have been reported worldwide [3-8]. The c.2746-2A>G variant in the present case was predicted to be a loss-of-function variant resulting in aberrant splicing via prediction and is expected to escape nonsense-mediated decay. Furthermore, population data, phenotype, and segregation analysis in the affected family members suggest that homozygous variants, such as c.2746-2A>G, in are likely to cause SCAR20.

This is the first report describing Korean families with SCAR20 carrying homozygous variants in . Progressive cerebellar atrophy, severe developmental delay, and coarse facial features are likely to point toward the diagnosis of SCAR20 among the heterogeneous group of intellectual disability and ataxia.

This study was supported by the National Research Foundation of Korea (NRF-2018R1C1B5085985). The authors would like to express their gratitude to all the patients and family.

Conception and design: YJL. Acquisition of data: ARK. Analysis and interpretation of data: GHS, SIL. Drafting the article: GHS, YJL. Critical revision of the article: JML, HB. Final approval of the version to be published: all authors. 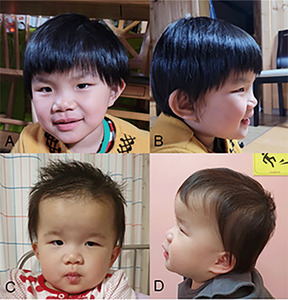 Fig. 1. Clinical pictures of the older sibling (II.1) (A, B) and younger sibling (II.2) (C, D). The telecanthus, broad bridge and base of the nose, long and deep philtrum, and thick lip are notable. We obtained written informed consent from the parents to publish the patients’ photographs. 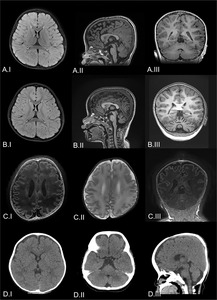 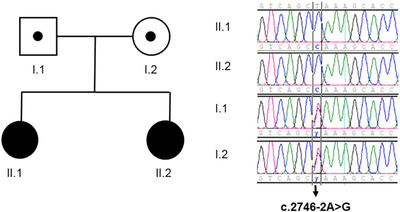 Fig. 3. Family pedigree and Sanger sequencing. Sanger sequencing in the two siblings (II.1, II.2) showing the homozygous c.2746-2A>G variants in and a heterozygous variant in the mother (I.2) and father (I.1).