Abstract
Genetic causes of developmental and epileptic encephalopathy (DEE) have been rapidly uncovered from mid-2010s. The mutations of gene enconding calcium channel, voltage-dependent, P/Q type, alpha 1A subunit (CACNA1A) are recently detected in DEE, which gene is already known well in familial hemiplegic migrine type 1 or episodic ataxia type 2. Ketogenic diet therapy (KDT) is effective in some DEE, which data is short in CACNA1A encephalopathy. A 3-month-old male with global developmental delay and multidrug-resistant focal seizures was diagnosed as epilepsy of infancy with migrating focal seizures (EIMFS). Brain magnetic resonance imaging and metabolic screening were all normal. Whole exome sequencing revealed two variants of CACNA1A: c.899A>C, and c.2808del that is from his mother. His seizures disappeared within 3 days whenever on KDT, which recurred without it. To our knowledge, this rare case of EIMFS with novel mutations of CACNA1A , is the first report in CACNA1A encephalopathy becoming seizure-free on KDT.
Keywords : Calcium channels, Diet ketogenic, Epilepsy, Infant, Growth and development.

The gene encoding calcium channel, voltage-dependent, P/Q type, alpha 1A subunit () have been recently reported in the patients with early-onset developmental and epileptic encephalopathy (DEE) whose seizures occur in early infancy and are multidrug-resistent [1-5]. This channel being expressed at presynatic terminal of cerebral neuronal papulation is related with synatic transmission, errors of which due to mutations impair synatic transmission and cause sustained neurologic deficit such as intellectual disability, autism, seizures, and ataxia [1,3,6,7]. Classically, is the gene being well-known to cause the diseases of familial hemiplegic migraine type 1, episodic ataxia type 2, and spinocerebellar ataxia type 6, most of which occur beyond 10 years of age [6].

Among phenotypes of encephalopathy, epilepsy of infancy with migrating focal seizures (EIMFS) is reported [2]. However, is quite rarely reported in the patients with EIMFS. Burgess et al. [8]’s large study for EIMFS found causative variants in 69% of total 135 patients, which variants were across 23 genes. The gene encoding potassium channel, subfamily T, member 1 (, 27% of 135 patients) and sodium voltage-gated channel, alpha subunit 2 (, 7%) or alpha subunit 1 () have been most commonly reported in their study [8]. However, mutations was not detected [8].

Including EIMFS, most phenotypes of early-onset DEE with mutations are refractory to multiple antiepileptic drug treatments [1-5]. Although ketogenic diet therapy (KDT) has been implemented broadly for intractable seizures in patients with DEE during childhood [9], it has been tried rarely on the patients with encephalopathy and its effectiveness have not been well reported yet [2-4]. KDT is recently known highly effective with adequate safety and tolerance, even in infants (under 2 years of age) with DEE including EIMFS [9,10].

This study was approved by the Human Research Ethics Committee of the Chonnam National University Hospital (CNUH, Gwangju, Korea; IRB no. CNUH-2017-167). The Chonnam National University Hospital Biomedical Research Institute Biobank provided the biospecimens after approval from the review board. Informed consent was obtained from the proxy of the patient.

A male who is 3 months and 17 days old, was transferred, due to convulsive status epilepticus. He was born at a gestational age of 37 weeks and 6 days, weighing 2.83 kg (10-15 percentile), without any specific perinatal events. Although his mother seemed to have mild intellectual problems, he had no family history of seizures, or other neurologic disorders. On admission, he was 61 cm in height (25-50 percentile) and was 5.0 kg in weight (<3 percentile), with 39 cm in head circumference (10 percentile). He seemed to delay in development, as he could not hold his head steady, could not grasp a rattle purposely, and could not follow a moving object with his eyes. He had mild hypotonia, strabismus, and laryngomalacia. However, he had no problems in feeding.

In Pediatric Intensive Care Unit (PICU), the proband had recurrent focal seizures, despite multiple antiepileptic drug treatments such as intravenous injection of lorazepam, fosphenytoin, levetiracetam, and phenobarbital, continuous infusion of midazolam and ketamine, and medication of pyridoxine and clonazepam through a nasogastric tube: frequently, he stared forward, with eyeball deviation, eyelid blinking, and lip twitching, and then he recurrently nodded his head, extending his body. On ictal electroencephalogram (EEG), sudden build-up of diffuse slow delta waves were followed by focal or multifocal sharps, and then generalized sharps/spikes and slow waves. Intermittently, migrating epileptiform discharges from unilateral hemisphere to the contralateral one were recorded (Fig. 1). In addition to these motor seizures, electrographic seizures were also noted. Brain magnetic resonance imaging (MRI) was normal. Abdominal ultrasonography revealed mild hydronephrosis in the left kidney. Echocardiography showed secondum atrial septal defect with left to right shunt. Metabolic screening including the levels of blood carnitine, pyridoxine and folic acid, blood amino acid analysis, and organic acid in urine, showed no abnormal results. Chromosomal analysis with chromosomal microarray study reveal no meaningful abnormal results.

Classic KDT with Ketonia (Namyang Co., Seoul, Korea) was started on 11th day of admission, and his seizures dramatically disappeared in 3 days for most of antiepileptic drugs to be gradually tapered. On 26th day, he was discharged on KDT, levetiracetam and clonazepam through a nasogastric tube, as he had difficulties in swallowing. However, KDT was suddenly discontinued by his mother 3 days after discharge, which resulted in status epilepticus again. On re-admission to the PICU, ketogenic diet was restarted and seizures disappeared within 3 days after KDT.

On follow-up in out-patient clinic, KDT was gradually tapered over 5 months after 6 months of classic treatment [10]. At 3 months after discontinuation of KDT (at 17 months of age), recurrent focal tonic or clonic seizures reappeared. At that time, the proband still could not control his head completely. He had severe failure to thrive with microcephaly, being 72.2 cm in height and 5.5 kg in weight with 41.6 cm in head circumference (all, <3 percentile). He was on tube feeding. Gastrostomy was performed at 19 months of age. His focal seizures became multidrug-resistant despite multiple antiepileptic treatment of levetiracetam, clonazepam, vigabatrin, carbamazepine, and topiramate. As seizures increased, apnea without electro-clinical correlation on video EEG monitoring appeared more recurrently. At 21 months of age, KDT was applied again due to status epilepticus despite additional intravenous injection of lorazepam, fosphenytoin, levetiracetam, and phenobarbital, and continuous infusion of midazolam and ketamine. KDT resulted in complete resolution of seizures within 3 days, and antiepileptic drugs were being gradually tapered.

The blood samples could be collected from the proband and only his mother: it could not be available from his biological father. Whole exome sequencing (WES) was performed only in the proband on the NextSeq 500 System (Illumina Inc., San Diego, CA, USA), using the SureSelect Human All Exon V5 (Agilent Technologies Inc., Santa Clara, CA, USA). WES revealed the two novel variants: c.899A>C (p.Gln300Pro) on exon 6 and c.2808del (p.Gln937Argfs*133) on exon 19 of (NM_001127221.1). All of in silico prediction tools (e.g. SIFT, Polyphens, MutationTaster and etc.) predicted the missense variant of c.899A>C as ‘deleterious’. The mutations were verified with Sanger sequencing, and the frameshift variant (c.2808del; p.Gln937Argfs*133) was found in his mother (Fig. 2).

The rare and devastating DDE, EIMFS is well-known to have migrating focal seizures between two cerebral hemispheres, which seizures occur in early infancy (<6 months of age) and gradually increase over few months with multidrug resistance. At the end, severe developmental problems and postnatal progressive microcephaly follow these seizures [8,11,12]. The examination of our proband at 17 months of age revealed the small head in addition to profound developmental impairment without complete head control.

KDT is expected to have moderate benefit in EIMFS, based on the limited case reports [9,11,12]. Effectiveness of KDT in EIMFS according to genetic etiologies is not studied yet [8,12]. However, as in our report, KDT can be one of effective treatments in EIMFS patients with mutations. Recently, guideline of KDT in infancy is available, although in past KDT was not used for infants (<2 years of age) as the infancy is a highly vulnerable period to nutritional imbalance [9,10]. Lyons et al. [13] reviewed the 33 studies with a total 534 infants (<2 years) with epilepsy syndrome, which reported about 60% of infants responded to KDT. The infants showed as similar rates of side effects and retention as older children [13].

Most cases of encephalopathy have haploinsufficiency of the gene [1-4]. Patients with biallelic insufficiency are quite rare [5]. Reinson et al. [5] reported two cases of early-onset DDE with biallelic mutations, whose parents and siblings with uniallelic variant of , all had mild intellectual disability with or without ataxia/headache, but had no seizures. In our report, the proband’s mother with the frameshift variant (c.2808del; p.Gln937Argfs*133) of also seemed to have mild intellectual problems, although she has no ataxia, headache, paralysis or seizures. Since the complete parental test was not able to perform and no further allele-specific sequence data were provided, “trans” state of the two variants in our case could not be ascertained.

Notably, our proband had respiratory arrest without EEG changes increasing in frequency as seizures were being aggravated, which was another concern to us. Using diffusion-weighted MRI, Loonen and their colleagues [14] observed that seizures in mice with homozygous mutations of caused spreading depolarization in the brainstem, whereas they did not in mice with heterozygous mutation. This depolarization was correlated with respiratory arrest causing cardiac arrest and death, which remind us sudden unexpected death in epilepsy [14].

Seizures in our proband responded to KDT so dramatically to disappear, but it cannot be sure that seizure-free time will persist. McTague et al. [12] reported that the one EIMFS patient with negative genetic results was seizure-free on KDT for about 3 years after infancy but was suffered intractable seizures again after discontinuation of KDT due to poor weight gain. Similarly, it will be our concern in near future how long we will continue KDT in our patient despite the problem of his poor weight gain, and whether we have to retry KDT or not whenever seizures recur.

This research was supported by the Basic Science Research Program through the National Research Foundation of Korea (NRF) funded by the Ministry of Education, Republic of Korea (grant no. NRF-2017R1D1A3A03000532). 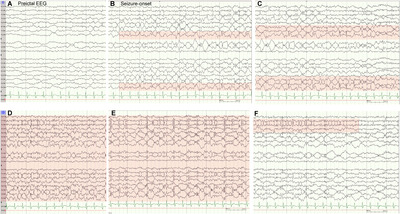 Fig. 1. Electroencephalogram (EEG) on admission showing migrating epileptiform discharges. This ictal EEG showed sudden-onset continuous right occipital sharps/spikes (A, B) propagating to ipsilateral hemisphere (C), which were then generalized with left temporal dominance initially (D) and lasted for about 3 minutes (E). Then, continuous left temporal spikes/sharps (F) were seen with contralateral hemispheric slow delta waves, which lasted for about 30 seconds.