Abstract
Mucopolysaccharidosis type VI (MPS VI) is an autosomal recessive lysosomal disorder caused by the deficiency of arylsulfatase B due to mutations in the ARSB gene. Here, we report the case of a Korean female with a novel variant of MPS VI. A Korean female aged 5 years and 8 months, who is the only child of a healthy non-consanguineous Korean couple, presented at our hospital for severe short stature. She had a medical history of umbilical hernia and recurrent otitis media. Her symptoms included snoring and mouth breathing. Subtle dysmorphic features, including mild coarse face, joint contracture, hepatomegaly, and limited range of joint motion, were identified. Radiography revealed deformities, suggesting skeletal dysplasia. Growth hormone (GH) provocation tests revealed complete GH deficiency. Targeted exome sequencing revealed compound heterozygous mutations in the ARSB genes c.512G>A (p.Gly171Asp; a pathogenic variant inherited from her father) and c.1157C>T (p.Ser386Phe; a novel variant inherited from her mother in familial genetic testing). Quantitative tests revealed increased urine glycosaminoglycan (GAG) levels and decreased enzyme activity of arylsulfatase B. While on enzyme replacement therapy and GH therapy, her height increased drastically; her coarse face, joint contracture, snoring, and obstructive sleep apnea improved; urine GAG decreased; and left ventricular mass index was remarkably decreased. We report a novel variant—c.1157C>T (p.Ser386Phe)—of the ARSB gene in a patient with MPS VI; these findings will expand our knowledge of its clinical spectrum and molecular mechanisms.
Keywords : Growth disorders, Lysosomal storage diseases, Mucopolysaccharidosis VI, N-acetylgalactosamine-4-sulfatase.

Mucopolysaccharidosis type VI (MPS VI), also known as Maroteaux–Lamy syndrome (OMIM #253200), is a rare lysosomal storage disorder caused by deficient activity of -acetylgalactosamine-4-sulfatase or arylsulfatase B [1]. Mutations in the gene, located on chromosome 5q13-14, cause reduced or absent enzymatic activity, leading to progressive accumulation of glycosaminoglycans, mainly dermatan sulfate and chondroitin 4-sulfate, in multiple organs and tissues [1]. MPS VI is progressive, multisystemic disorder characterized by coarse facial features, dysostosis multiplex, short stature, cardiovascular and respiratory impairment, ocular abnormalities, and dermal thickening [1]. Rate of disease progression is widely varied from the rapidly progressing phenotype with the early onset usually before the age of 2 years to the slowly progressing phenotype with a slower clinical course and fewer systemic involvements [1]. In 2011, the estimated incidence of MPS VI ranged from 0.36 to 1.30 per 100,000 live births [2]. In Korea, a unique case report of three patients with MPS VI has been documented [3].

In this study, we report a case of MPS VI with a novel variant in a Korean patient.

A Korean female aged 5 years and 8 months, who is the only child of a healthy, non-consanguineous Korean couple, visited our hospital because of her severe short stature (-2.66 of height z-score). Her developmental milestones and intelligence level were normal. She had a medical history of umbilical hernia and recurrent otitis media. Her parents complained about her snoring, mouth breathing, and intermittent sleep apnea. Subtle dysmorphic features, such as mild coarse face, joint contracture, hepatomegaly (one finger breadths), and limited range of joint motion, were observed. Radiographic images showed deformities, which was suggestive of skeletal dysplasia include the following: metaphyseal fraying and widening of multiple bones; short, broad, irregular shaped metacarpal and metatarsal bones; genu valgum; deformed configurations in distal radius and ulna; poorly developed acetabulum and femoral head deformity; and malformation of thoracolumbar vertebral body (Fig. 1A-F). Growth hormone (GH) provocation tests revealed a complete GH deficiency. Initially, targeted exome sequencing (TES) was performed because skeletal abnormalities, such as MPS, were suspected, and the result revealed a compound heterozygous mutation of the gene, c.512G>A (p.Gly171Asp), which was a pathogenic variant reported previously [3] inherited from the father, and c.1157C>T (p.Ser386Phe), which was a novel variant inherited from the mother. The c.1157C>T variant was predicted to be damaging and disease-causing by Polyphen-2 (score 0.989) (http://genetics.bwh.harvard.edu/pph2) and mutationTaster (score 0.999) (http://www.mutationtaster.org). Urine glycosaminoglycan (GAG) was elevated at 55.8 mg/mmol Cr (reference range: <8.0 mg/mmol Cr), as revealed by the quantitative test. Liquid chromatography with tandem mass spectrometry (LC-MS/MS) assay for MPS through a dried blood spot revealed decreased arylsulfatase B activity (0.06 μM/h; reference, >3.45 μM/h). The functional independence measure showed a decreased score of 105/126, and minimal to maximal assistance was required when she tried to dress and bath. Hand movements, such as opening a cap or bag, were particularly challenging. Range of motion of the upper extremities was mildly limited in the shoulders, elbows, forearms, wrists, and fingers. Echocardiography revealed trivial mitral regurgitation and increased left ventricular mass index (LVMI). Volume of the liver and spleen was not increased in abdominal computed tomography (CT). Brain CT revealed diffuse cortical bone thickening, abnormal J-shaped sella turcica, and craniocervical junction narrowing, which was compatible with dysostosis multiplex (Fig. 1G). Ophthalmologic examination revealed corneal opacities. Polysomnography showed severe obstructive sleep apnea, and tonsillar adenoidectomy was recommended by an otolaryngologist. GH therapy began first at the age of 6 years, and enzyme replacement therapy (ERT) with 1 mg/kg/week of galsulfase was commenced at the age of 6 years and 8 months. While on ERT and GH therapy for 1 year, her height z-score increased drastically from –2.41 to –1.93 (Fig. 2); her coarse face, joint contracture, snoring, and obstructive sleep apnea improved; urine GAG decreased; and LVMI decreased remarkably (Table 1) [4-6]. At the age of 7 years and 9 months, she complained of intermittent episodes of tingling sensation in her hand, and a nerve conduction study revealed lesions in both median nerves, suggesting carpal tunnel syndrome. She underwent a carpal tunnel release operation at the age of 7 years and 10 months. Although genu valgum is under follow-up, surgery was not required yet. She continued to receive ERT and GH therapy.

This case report discusses the fourth MPS VI patient in Korea, wherein a novel variant was identified in the patient. The disorder is transmitted in an autosomal recessive manner and is caused by mutations in the gene, which is located on chromosome 5q13-14, contains 8 exons, and spans approximately 206 kb [7]. Since the gene was first identified, 197 different mutations have been described in patients with MPS VI (the Human Gene Mutation Database Professional, QIAGEN, Redwood City, CA, USA) 2021.2 [http://www.hgmd.org]), which include 147 missense/nonsense mutations, 24 small deletion mutations, 11 splicing mutations, 7 gross deletion mutations, 6 small insertion mutations, and 2 small indel mutations. Although phenotype-genotype correlations are yet to be elucidated in MPS VI [7], a previous study showed that clinical severity ranged from slow to rapid progression associated with mutations [1]. In addition, a few mutations are known to be related to specific features such as osteoarticular phenotype in Y210C mutation and cardiac phenotype in R152W mutation [1]. In the present study, a novel variant—c.1157C>T (p.Ser386Phe)—was identified using TES.

This variant was neither found in ExAC nor 1000G databases. The p.Ser386 residue is completely conserved across multiple species and is close to the glycosylation site (location 366). Another variant, c.512G>A (p.Gly171Asp), identified in the patient, was previously reported in the case of P3 (Table 2) with homozygote allele carriers who presented with short stature, coarse face, corneal opacity, and stiffness in multiple joints.

Despite the effectiveness of ERT in MPS VI patients, unmet needs still exist. Horovitz et al. [8] reported that early initiation of ERT may not fully prevent poor outcomes, including hearing loss, corneal clouding, skeletal, cardiologic, and nervous symptoms. In the present study, clinical symptoms including coarse face, joint contracture, snoring, and obstructive sleep apnea were improved after ERT; and urine GAG was decreased. In addition, one year of ERT did not prevent the progression of carpal tunnel syndrome and genu valgum in the patient.

In our patient, LVMI was remarkably decreased, but heart valve regurgitation did not improve despite ERT, which was similar to the cases of P1, P2, and P3 (Table 2). In a retrospective study of cardiac involvement of MPS VI in 44 patients aged from 0 to 42 years (mean 6.7 years) [9], the prevalence of LV hypertrophy was reported 53.3% in male and 27.3% in female. In the same study, LV remodeling was improved in three out of eight and LV hypertrophy was improved in four out of eleven after a mean follow-up of 5.9 years on ERT.

Interestingly, our patient was diagnosed with GH deficiency and MPS VI. To date, only one patient with MPS VI and GH deficiency has been reported [10]. Whether GAG accumulation in the brain interferes with GH releasing hormone secretion from the hypothalamus is not known [10]. In general, the short stature in MPS VI patients is due to abnormal GAG deposition, resulting in impaired cellular function in skeletal development. Growth plates are particularly sensitive to the accumulation of partially degraded GAGs such as dermatan sulfate and chondroitin sulfate, which subsequently leads to short bones and growth plate disorganization [11]. Regarding the effectiveness of ERT on height in patients with MPS VI, several studies have shown partially positive results. Horovitz et al. [8] reported an average height gain of 3.1±1.2 cm/yr after early ERT. Decker et al. [12] reported that in a study of 56 MPS VI patients (age, 5-29 years), the mean height increased by 2.9 cm and 4.3 cm after 48 and 96 weeks of ERT, respectively. However, the long-term effect of GH treatments on growth is unknown, and only limited cases of GH therapy in MPS VI have been reported to date [13,14]. Cattoni et al. [13] reported an average increase in height velocity z-score of +4.23±2.9 and +4.55±0.96 after 6 and 12 months of GH treatment, respectively. Polgreen and Miller [14] reported that growth velocity increased from 2.3 cm/yr to 5.9 cm/yr after 1 year of GH treatment. In the present study, she gained a height of 7.5 cm/yr with combined ERT and GH therapy, a height velocity faster than that of healthy children (Fig. 2) [15]. In this regard, the efficacy of the combination of ERT and GH therapy needs to be investigated in well-organized studies.

We describe a Korean patient with an MPS VI diagnosis and a novel missense mutation, c.1157C>T (p.Ser386Phe), in the gene. This finding will provide more information for genetic counseling and expand our understanding of the clinical spectrum and development of MPS VI.

This study was supported by a 2022 research grant from Pusan National University Yangsan Hospital, Korea. 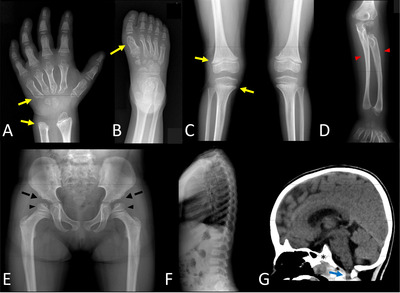 Comparison of clinical findings before and after enzyme replacement therapy (ERT)

Genotype and clinical manifestations of mucopolysaccharidosis VI in Korea