Abstract
Purpose: Whole-exome sequencing (WES) has been a useful tool for novel gene discovery of various disease categories, further increasing the diagnostic yield. This study aimed to investigate the clinical utility of WES prospectively in undiagnosed genetic diseases.
Materials and Methods: WES tests were performed on 110 patients (age range, 0-28 years) with suspected rare genetic diseases. WES tests were performed at a single reference laboratory and the variants reported were reviewed by clinical geneticists, pediatricians, neurologists, and laboratory physicians.
Results: The patients’ symptoms varied with abnormalities in the head or neck, including facial dysmorphism, being the most common, identified in 85.4% of patients, followed by abnormalities in the nervous system (83.6%). The average number of systems manifesting phenotypic abnormalities per patient was 3.9±1.7. The age at presentation was 2.1±2.7 years old (range, 0-15 years), and the age at WES testing was 6.7±5.3 years (range, 0-28 years). In total, WES test reported 100 pathogenic/likely pathogenic variants or variants of uncertain significance for 79 out of 110 probands (71.8%). Of the 79 patients with positive or inconclusive calls, 55 (50.0%) patients were determined to have good genotype-phenotype correlations after careful review. Further clinical reassessment and family member testing determined 45 (40.9%) patients to have been identified with a molecular diagnosis.
Conclusion: This study showed a 40.9% diagnostic yield for WES test for a heterogeneous patient cohort with suspected rare genetic diseases. WES could be the feasible genetic test modality to overcome the diversity and complexity of rare disease diagnostics.
Keywords : Exome sequencing, Rare diseases, Gene discovery.

To date, approximately 7,000 rare genetic diseases are known, and many other diseases fall into the undiagnosed area of disease [1]. Many of these diseases are extremely rare and have overlapping phenotype with other diseases, making it difficult to pinpoint a specific clinical diagnosis.

Therefore, even when the symptoms start presenting during childhood, it is not uncommon for a patient to remain undiagnosed until adulthood without appropriate genetic testing. Not having an accurate molecular diagnosis could adversely affect patient’s quality of life, as they continuously undergo numerous unpleasant and costly unnecessary tests [2].

The diagnostic yield of rare genetic diseases could vary by the test methods, affected organ system, and patient population [3]. Whole-exome sequencing (WES) test that surveys the majority of the protein-coding exons of almost all genes, has revolutionized the diagnostic process for patients suspected of having rare monogenic disorders [4]. In addition, WES has been a useful tool for novel gene discovery of various disease categories, further increasing the diagnostic yield [5]. The diagnostic yield of WES test could vary from 25 to 52% by what the primary phenotype is [5-7].

Clinically, using innovative and minimally invasive diagnostic methods in children remains essential. A genetic test using a buccal swab is one of the ideal substitutes for blood and has high sensitivity and specificity and is a noninvasive approach [8]. The purpose of this study was to confirm the diagnosis rate by applying the WES using a buccal swab to undiagnosed patients suspected of monogenic disorders.

This prospective cohort study was conducted between July 2018 and July 2019. A series of 110 consecutive patients who presented at the Division of Pediatric Genetics and Metabolism, Rare Disease Center, Pusan National University Children’s Hospital, Yangsan, South Korea with clinically suspected of having a rare genetic disease were recruited (age range, 0-28 years) from 110 nonconsanguineous families. Their detailed demographic and clinical characteristics, including age and diagnosis at presentation, sex, family history, laboratory findings, radiologic findings, and genetic testing results, were reviewed. Previous genetic tests before receiving WES test included chromosome analyses, chromosome microarray, single or targeted gene panel testing, or targeted gene panel testing by exome sequencing. According to a medicines regulatory point of view, in the USA, ultra-rare is defined as it affects 1 patient per 50,000 people [9].

Informed consent was obtained from all patients or their legal guardians after genetic counseling regarding the WES test. The study was approved by the Institutional Review Board of Pusan National University Yangsan Hospital (IRB no. L-2018-248-1).

The number of patients with variants and the identity of these variants have been summarized (Fig. 1, Supplementary Table 1). A total of 110 patients suspected to have the genetic disease were performed WES. False positives in WES from saliva (5.5%, 6/110), failure to meet the quality control (QC) criteria. False positives in next generation sequencing occurred at 5.5%. WES analysis using EVIDENCE identified 100 variants, including pathogenic variant (PV) 17, likely pathogenic variant (LPV) 32, and 121 variant of uncertain significance (VUS), in 79 (71.8%) of 110 probands. Among these, genotype-phenotype matching detected 57 variants in 55 (50.0%) patients. These patients were assessed by Sanger sequencing and family member testing and segregation analysis resulting in 47 variants, including 33 novel variants, in 45 (40.9%) patients confirmed as being responsible for 42 genetic disorders.

In the mode of inheritance for confirmed cases, autosomal dominant was 64%, X-linked was 15%, autosomal dominant unknown inheritance was 11%, autosomal recessive was 9%, and autosomal dominant inherited was 2% (Fig. 2). Blended phenotype was seen in 2.2% of patients. Looking at the distribution of causative variants, PV accounted for 28%, LPV 38%, and VUS for 34% after family member testing and segregation (Fig. 3). However, after re-classification by clinical reassessment, PV accounted for 58%, LPV 34%, and VUS 9% (Fig. 3). In the mutant type of confirmed causative variants, missense was the most common with a frequency of 62%, followed by nonsense 16%, frameshift 11%, splice site 6%, and in the frame in/del 5% (Fig. 4). The ultra-rare disease identified in this study was 66.6%, 28 out of 42 genetic diseases (Fig. 5).

3. Identification of ultra-rare genetic diseases and its impact on clinical management

The confirmation of an ultra-rare genetic disease by WES affected patient management (Fig. 6).

Disease monitoring was initiated in 46.6% of patients. In addition, the systemic involvement of specific genetic diseases was investigated in 22.2%, the change of estimated inheritance pattern of genetic disease was 11.1%, and the prognosis was changed in 15.5%. Medical initiation occurred in 4.4% and reproductive planning was initiated in 2.2%. For example, a patient presented with an intellectual disability at the age of 11 years. He experienced recurrent epistaxis at age 10. Family history revealed father and grad father had recurrent epistaxis and delayed bleeding time after the surgical procedure. He showed dysmorphic facial features such as strabismus, thick eyebrows, smooth philtrum, a long face with a prominent chin, a prominent forehead, and protruded teeth. T2/FLAIR image revealed hyper-intense white matter signals in the periventricular region. His CBC profile revealed 6200-6.9-350K and elevated ALP 798 (86-315) IU/L. PLT functional test (Epi-PFA, ADP-PFA) (Blood) was normal. Ristocetin cofactor assay (Blood) was slightly decreased to 45% (range, 56-187). VWF Ag (Blood) was low at 38% (range, 47-197). WES was done in the patient, resulting in the gene (NM_001172509) variant in the c.1136A>C (p.Gln379Pro) on exon8 which was VUS, and the gene (NM_00055212) variant in the c.4585G>C (p.Asp1529His) on exon 28 which was derived from his father (Fig. 7). These two variants were conserved among the different species. Finally, he had -associated syndrome and type 2 Von Willebrand disease simultaneously and displayed blended phenotypes. The results of WES affect his management regarding discontinuation of iron medication and investigation of systemic involvement such as heart, kidney, bone density, and spine deformity as well as regular monitoring of bleeding tendency.

Implementation of WES in clinical practice is at a turning point because approximately 80% of rare diseases are estimated to have a genetic origin. The application of WES in diagnostics has transformed the clinic and helped systematic management of the disease when the causative variants are revealed [10]. This study shows a 40.9% diagnostic yield in 110 patients in whom initial diagnostic tests have negative results. To find causative genes related to rare genetic diseases, WES using buccal swabs as non-invasive specimens was applied in the patients suspected of having rare genetic diseases. The Sanger sequencing and WES agreement was 94.5% (104/110), and the QC criteria were met at 97.3% (107/110) which was relevant. Said et al. [11] reported that the DNA yield from buccal epithelial cells, per set of experiments, was significantly higher than whole blood.

In our study, in the comparison between the confirmed case and the unconfirmed case, it was identified that the frequency of the dysmorphic face was higher in the confirmed case. In the case of a genetic syndrome, if the dysmorphic face is seen as a phenotype, it is more likely that there is a genetic cause. Actually, when seeing patients, descriptions using accurate Human Phenotype Ontology terms for facial appearance will be important in clinical practice. Huang et al. [12] also reported that patients with syndromic short stature having facial dysmorphism had a significantly higher diagnostic rate than those without the corresponding phenotype, which suggested this phenotype might be applied as a predictor for the etiology of rare genetic disease. In addition, there may be differences in the likelihood of a genetic cause depending on which part of the body is involved in the actual patients.

In this study, the frequency of involvement of the visual system in confirmed cases was much higher (51.1%) than that in unconfirmed cases. Retterer et al. [5] also reported a high diagnostic yield of 47% in individuals with problems with the visual system when examining the diagnostic yield for a definitive diagnosis based on the primary phenotype using WES. According to a recent paper, Zamani et al. [13] reported that WES revealed disease-causing variants in 82% of the enrolled cases with vision impairments, suggesting that WES has a great influence on the efficiency of diagnosis depending on which cohort group it is tested.

In the current study, the genetic diagnosis helped us understand the systemic constellation of symptoms and mutations related to each disease and to look out for concomitant organ phenotypes in the affected patients; neurological investigations including brain imaging and EEG, ophthalmic evaluation including strabismus and cataract, endocrinal assessment and skeletal survey as well as planning for the reproductive issue such as infertility.

This study has some limitations. Firstly, false positives in WES from saliva was 5.5% (6/110) which was relevant. The reasons for false positives are as follows. Among them, three cases showed low variant allelic frequency (around 20-25) suggesting low levels of mosaicism while the rest were considered technical errors such as PCR error. Secondly, since this study conducted only the proband-only WES test, a trio-WES or trio-WGS test will be required later for the remaining 59.1% who have not been diagnosed. Lastly, for 9% of VUS, it seems necessary to identify pathogenicity through additional functional studies.

In conclusion, this study shows a 40.9% diagnostic yield for the undiagnosed genetic disease by WES. Patients with dysmorphic facial features and visual system involvement are more likely to have an underlying genetic etiology. WES facilitates genetic diagnosis, eventually enabling us to better understand the ultra-rare disease and serve as a guide for establishing appropriate genetic counseling, surveillance, and management strategies.

This work was supported by a 2-Year Research Grant of Pusan National University. 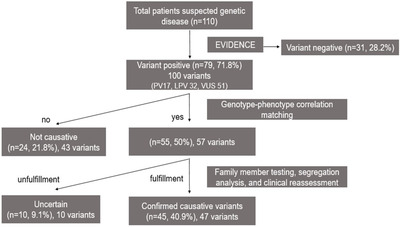 Fig. 1. Data analysis strategy. EVIDENCE, the streamlined variant prioritization software program, was applied in-house to prioritize variants based on American College of Medical Genetics and Genomics guidelines and the phenotype of each patient and to interpret these variants consistently. 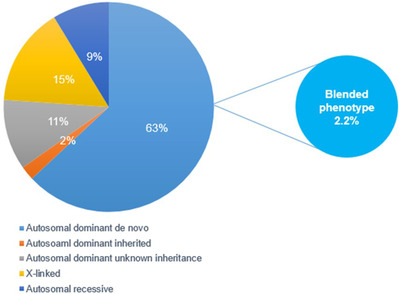 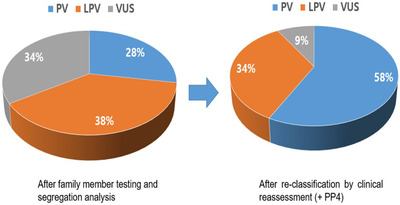 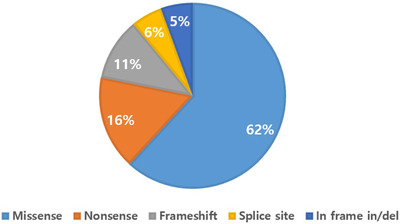 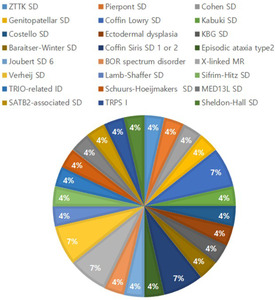 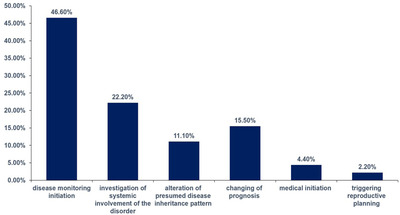 Fig. 6. The results of whole-exome sequencing affect management for confirmed patients with the genetic disease. 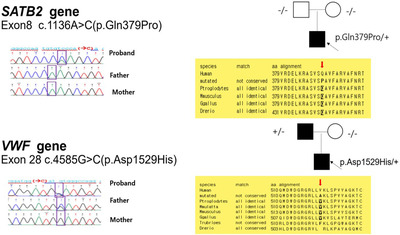 Delineation of demographic and clinical features of the 110 study participants