Abstract
The gene encoding solute carrier family 9 member 6 (SLC9A6) on Xq26.3 is associated with Christianson syndrome (CS) mimicking Angelman syndrome. In CS, developmental and epileptic encephalopathy (DEE) appears in about 20%, and DEE with spike-and-wave activation in sleep (SWAS) is reported only in several cases. A 10-year-old boy with DEE showed multidrug resistant focal seizures from 6 months of age. He had progressive microcephaly, regression, global developmental delay without speech, hyperkinesia, and truncal ataxia; he had a long thin face, esotropia, and happy demeanor. Brain magnetic resonance imaging demonstrated cerebellar atrophy. Electroencephalogram at 7.5 years of age showed nearly continuous diffuse paroxysms in slow wave sleep. The seizures were responsive to corticosteroids for a while. Trio whole exome sequencing exhibited a likely pathogenic variant of SLC9A6 in the proband and his asymptomatic mother: c.1194dup (p.Leu399AlafsTer12). This is a rare case report of CS with DEE-SWAS in a Korean patient.
Keywords : Status epilepticus, Growth and development, Child, Genes, Syndrome.

The gene of solute carrier family 9 member 6 (), located on Xq26.3, encodes isoform 6 of the sodium/hydrogen exchanger superfamily (NHE6) abundant in the human brain [6-9]. maintains cellular polarity in pre- or post-synaptic neurons and astrocytes and regulates endosomal trafficking [6-9]. The mutations of leading to non-functional NHE6 seem to disturb synapse development and plasticity [6-9]. Male patients with mutations present the X-linked severe neurodevelopmental syndrome of Christianson syndrome (CS) mimicking Angelman syndrome [6-10]. Some females with heterozygous variants of are asymptomatic, but others have mild to moderate intellectual disability or behavioral problems [9,11].

Patients with CS have severe global developmental delay without speech, progressive or acquired microcephaly, craniofacial dysmorphism, progressive cerebellar atrophy, epilepsy, ataxia, and ophthalmoplegia [7-13]. Epilepsy is reported in most patients with CS, and about 20% belong to DEE [8,14-17]. Studies show mutations in some patients with DEE-SWAS who were supposed to have CS [5,14-18]. Here, we report a non-verbal male child with DEE-SWAS who had acquired microcephaly, progressive cerebellar atrophy, mild facial dysmorphism, hyperkinesia, and ataxia. This rare case with the features of CS and DEE-SWAS had a novel frameshift mutation of .

A 6-month-old boy first visited our hospital for recurrent tonic deviation of his head and eyes with drooling and cyanosis, with no awareness. He had a height of 70.5 cm (50-75 percentile) and a weight of 8.21 kg (25-50 percentile) with a 41.5 cm-sized head (10 percentile). His development was normal. Brain magnetic resonance imaging (MRI) showed mild external hydrocephalus in both temporal regions. The electroencephalogram (EEG) showed no abnormality. The patient was born at a gestational age of 39 weeks after an uneventful pregnancy, weighing 2.83 kg to unrelated healthy parents. In his family, his elder sister had febrile convulsions, and each cousin of his mother and father had epileptic seizures. However, no developmental disorders were reported.

After one year of age, the patient showed flattening or regression in development and mild hypotonia. At 2 years of age, he could start to walk alone. However, he had no problems in feeding during infancy and early childhood. After one and a half years, he was diagnosed with DEE due to 1) multi-drug resistant focal tonic or tonic-clonic seizures even on carbamazepine, levetiracetam, and valproic acid; 2) progressive developmental problems; 3) focal epileptiform discharges with progressively disorganized and slow background activities. Between 4 and 5 years of age, he was transiently seizure-free after add-on therapy with topiramate.

While growing up, he had a long thin face, esotropia, happy demeanor, and progressive microcephaly. He had truncal ataxia and showed hyperkinetic movements intermittently. Brain MRI at 5 years and 5 months revealed diffuse cerebellar atrophy (Fig. 1). The intelligence quotient at 5 years and 10 months of age assessed using the fourth edition of the Korean Wechsler Preschool and Primary Scale of Intelligence, Bender-Gestalt test, House-Person-Tree test, and Social Maturation Scale, was around 30, which was suggestive of severe intellectual disability.

After 6 years, his focal seizures increased. He stared into space with his stiff right arm for a while (<5 minutes). The patient had focal or bilateral, clonic or tonic-clonic seizures during sleep. Clonazepam was added, but it was not so effective. At 7 and a half years, EEG during sleep showed nearly continuous and synchronous bifrontal or frontally-dominant generalized spikes/sharps and slow waves (Fig. 2). These continuous diffuse paroxysms occupied more than 85% of slow wave sleep. Failure to thrive and microcephaly were apparent at that time: 112.3 cm height, 17.0 kg weight, and 49.0 cm head circumference (<3 percentile in all). Prednisolone treatment for about 6 months ameliorated his seizures and EEGs. However, discontinuation of prednisolone led to recurrent clonic seizures. At 10 years and 7 months, he still had intermittent seizures, despite an additional trial of lacosamide and perampanel.

The blood samples were collected from the proband and his parents. Whole exome sequencing (WES) was performed using the TruSeq Exome Kit (Illumina Inc., San Diego, CA, USA) on the HiSeq2000 platform (Illumina Inc.). WES revealed a novel variant in the proband and his mother: c.1194dup (p.Leu399AlafsTer12) on exon 10 of (NM_006359.3). The results were verified using Sanger sequencing (Fig. 3).

Seizures in DEE-SWAS usually start early childhood (range, 2-12 years of age; peak, 4-5 years) accompanied by new onset or worsening cognitive and behavioral problems [1-3]. Focal or bilateral tonic-clonic seizures precede the ESES pattern in most patients with DE-SWAS, which are usually multi-drug resistant [1-3]. Improvement of the SAWS pattern is observed in adolescence, with normalized sleep architecture in addition to neuropsychiatric improvement [1,2]. Corticosteroid treatment for at least 6 months is preferred by most clinicians, as it seems to improve the ESES pattern and cognitive outcomes [3]. In addition, clobazam is another effective drug [3]. Except for , several genes are reported in DEE-SWAS: non-syndromic genes (, , , , , , and ), and syndromic genes, such as (reported in dentatorubro-pallidoluysian atrophy), (in familial encephalopathy with neuroserpin inclusion bodies), and (in Costeff syndrome) [4,5].

Male patients with CS and mutations have similar clinical phenotypes to Angelman syndrome, as they have a psychomotor delay with speech deficits, happy demeanor with strabismus, acquired microcephaly, ataxic gait, hyperkinetic movements, seizures, autistic behaviors, sleep disturbance, and poor weight gain [7-13,17]. CS shows severe intellectual disability and poor weight gain (unlike AS) [7-10,17]. Although children with CS also have a happy demeanor, they have a long thin face with a prominent jaw, which is different from AS [7,17]. Studies show motor regression, progressive cerebellar atrophy, and a short life span in CS alone [7-13,17]. Cerebellar atrophy develops in 60% of CS, supposedly due to the loss of Purkinje cells [8,13]. DEE-SWAS, previously called “ESES,” based on its EEG pattern, is reported only in CS, not in AS [17].

Seizures in CS that usually begin before 3 years of age include infantile spasms and bilateral or focal tonic/tonic-clonic, myoclonic, atonic, and absence seizures in type [8,16,17]. EEGs from CS patients are mostly abnormal, showing epileptiform discharges (e.g., generalized or focal/multifocal spike-waves, hypsarrhythmia, and bilateral synchronous spike-waves patterns) in addition to the abnormal background (diffuse slowing without normal sleep architectures) [8,16-18]. Drug response to seizures varies from multi-drug resistance to relatively good with seizure freedom for more than one year [8]. Epilepsy syndromes reported in CS patients are mostly DEE, including infantile epileptic spasms syndrome, Lennox-gastaut syndrome, DEE-SWAS, and unclassified DEE [8,14-18]. In Korea, a splicing mutation (c.316_325+28del) of (NM_006359.2) was first reported in 2018 from a patient with unclassified early-onset epilepsy in infancy or early childhood (<3 years of age) [19]. The pathogenic variant was revealed using targeted gene sequencing covering 172 candidate genes [19]. As this panel was unavailable in our clinic, trio WES was used in our family.

DEE-SWAS in CS has been reported in less than 10 cases, of which, half the patients present an ESES pattern after 6 years of age (range, 6-8 years) [5,14-18]. In our case, the ESES pattern appeared at 7.5 years of age, 1.5 years after his focal motor seizures increased. Although a focal seizure was the main phenotype in our report, generalized or bilateral tonic-clonic seizures were more frequently observed in previous reports [5,14-18]. Cerebellar atrophy, noted in our patient after 5 years, was found in two cases after 6 years of age [14,16]. Although most seizures observed in CS and DEE-SWAS are multidrug-resistant (as in our proband), felbamate and levetiracetam were effective in one previous patient for each [17,18]. However, there is insufficient data on corticosteroid treatment, which was the most effective in our patient [5,14-18].

There is insufficient data on genotype and phenotype correlation in patients with CS and mutations. The novel variant of c.1194dup (p.Leu399AlafsTer12) (in this case) was located in exon 10 of the total 16 exons of (NM_006359.3). The region from exons 9 to 14 is the site encoding the transmembrane ion translocation domain interacting with the angiotensin II type 2 receptor (AGTR2) [14]. AGTR2 is associated with intellectual disability and epilepsy with unknown mechanisms [14]. More than 50% of mutations in CS are from AGTR2 interacting region [14].

The clinical features in our male patient are consistent with CS features, such as global developmental delay without speech, regression, progressive microcephaly, acquired cerebellar atrophy, mild facial dysmorphism, strabismus, hyperkinesia, ataxia, and failure to thrive in addition to drug-resistant epilepsy. Results of EEGs after 7 years showed nearly continuous bilateral synchronous paroxysms in NREM sleep, compatible with DEE-SWAS. Although clonazepam was not so effective, corticosteroid treatment improved either of his seizures and the EEG pattern for a while. This rare case of CS with DEE-SWAS in a Korean patient had a novel frameshift mutation of .

This research was supported by the Basic Science Research Program through the National Research Foundation of Korea (NRF) funded by the Ministry of Education, Republic of Korea (grant no. NRF-2017R1D1A3A03000532). 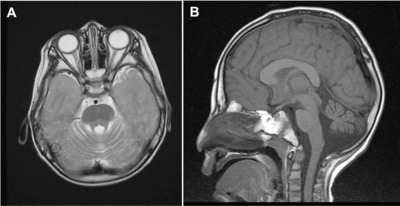 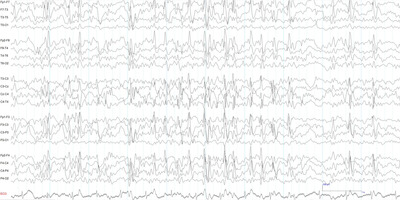 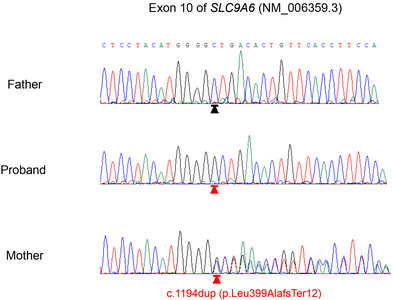 Fig. 3. Electropherogram of direct sequencing of (NM_006359.3) shows a frameshift mutation (red arrowhead) of c.1194dup (p.Leu399AlafsTer12) in the proband and his mother, but a wild-type in his father (black arrowhead).