Chromosomal microarray (CMA) has been a first-line, powerful tool for evaluating unknown etiologies in patients with neurodevelopmental impairments and congenital anomalies [1]. Furthermore, certain copy number variants (CNVs) detected by the CMA test, such as microdeletions and microduplications, are associated with developmental delay, intellectual disability (ID), and/or autism spectrum disorders [2].

Rajcan-Separovic et al. [3] reported a novel chromosomal microdeletion with similar clinical phenotypes in 2007. They described two unrelated patients with idiopathic ID, autistic behavior, facial dysmorphism, and somatic congenital anomalies associated with an interstitial microdeletion of the 2p15-p16.1 region. Since the first report, over 30 patients with 2p15p16.1 microdeletion syndrome have been documented [4,5].

Two critical regions in the 2p15p16.1 microdeletion syndrome have been identified: the proximal 2p15 and distal 2p16.1 regions [5]. Although the genotype and phenotype correlation of two regions remains uncertain, previous studies have described the overlapping characteristics in each region [5].

Here, we present the case of an infant with facial dysmorphism, developmental delay, and congenital hypothyroidism caused by a novel, de novo 2p16.1 microdeletion as one of the critical regions of 2p15p16.1 microdeletion syndrome, and we review the literature on the genes involved in our case.

This study was approved by the Institutional Review Board of Chungnam National University Hospital (IRB No. 2022-10-031). Written informed consent was obtained from the patient and the patient’s parents for publication of this case report.

A nine-month-old boy was referred to an outpatient clinic for the psychomotor delay and the inability to roll over or flip. He was the first child of healthy, non-relative parents with no family history of inherited disorders including thyroid disease. He was born via vaginal delivery at 40 weeks gestation with a birth weight of 3,490 g (10-50th percentile). The patient showed elevated thyroid stimulating hormone (TSH) (10.6 μIU/mL) on neonatal screening test, but further evaluation of hypothyroidism had not been performed until first visit to our clinic. Automated auditory brainstem response test was normal. Intermediate esotropia has been observed since he was 1 month old, and he was diagnosed with conventional esotropia at 5 months. He began covering treatment and planned bilateral rectus recession surgery before the age of 1 year.

The results of the chest x-ray, electrocardiogram, abdominal sonography, and brain magnetic resonance imaging (MRI) were unremarkable. His bone age was 9-12 months. A spine x-ray revealed mild anterior scalloping of the lumbar vertebral bodies. On the Bayley Scale of Infant and Toddler Development III, he had global developmental delay: his cognitive age, acceptance language age, expression language age, fine motor development age, and gross motor development age were 6 months, 4.3 months, 3.3 months, 4.3 months, and 4.3 months, respectively. He started rehabilitation treatment. At 10 months of his age, the levels of free T4, triiodothyronine, and TSH were 0.62 ng/dL, 1.14 ng/dL, and 75.41 μIU/mL, respectively. He was diagnosed with hypothyroidism, and levothyroxine was administered immediately.

The patient and his parents underwent chromosome microarray testing to evaluate the underlying causes of dysmorphism and developmental delay. The patient’s karyotype was 46, XY, and chromosome microarray revealed 622 kb deletion in 2p16.1 and 661 kb duplication in 7p22.3. His father had a 662 kb duplication in 7p22.3 and a 2.3 Mb duplication in 8p23.2, whereas his mother had a 1.2 Mb deletion in 16p11.2. Because no pathogenic reports have been found, the copy number variation in parents was presumed to be benign. Thus, the 622 kb microdeletion in 2p16.1 was a de novo inheritance.

At the age of 24 months, he began crying or laughing unexpectedly, even while sleeping. He could babble but could not speak a word at that age, so he underwent language rehabilitation therapy.

At the age of 36 months, his weight, height, and head circumference were 14.9 kg (50-75th percentile), 99.1 cm (90-95th percentile), and 47.2 cm (3-5th percentile), respectively. The patient began babbling and walking with a grip. He was attached to his mother but uninterested in others. He began swallowing without chewing well, so he underwent swallowing rehabilitation. His brain MRI was normal at the age of 36 months, but his electroencephalogram (EEG) showed occasional suspicious sharp wave discharges from the left frontal areas. He showed no signs of seizures. While taking synthyroid, thyroid function was well controlled and he tried to stop levothyroxine at 36 months of his age to determine whether his hypothyroidism is permanent or not. After 2 months of holding medication, 0.93 ng/dL of free T4 and 16.4127 μIU/mL of TSH were measured. Thyroid sonography was normal. Thyroid scan showed diffusely enlarged both lobes, markedly increased uptake in both lobes. Currently, we are considering to restart levothyroxine.

We described the first Korean case of 2p15p16.1 microdeletion syndrome. In our patient, global developmental delay, ID, and dysmorphic craniofacial features were associated with a novel, de novo 622 kb microdeletion of chromosome 2p16.1. Moreover, congenital hypothyroidism was detected in our case.

To our knowledge, there have been no reports of thyroid abnormalities in patients with 2p15p16.1 microdeletion. However, our patients had congenital hypothyroidism. His congenital hypothyroidism may have been caused by thyroid dyshormonogenesis and not by ectopic thyroid or thyroid hypoplasia. In an animal model, the gene on chromosome 2 was identified as a potential modifier for the organogenesis and function of the thyroid gland: elevated TSH, decreased thyroid hormones, and increased risk of thyroid hemiagenesis. These results revealed that a highly conserved locus on mouse chromosome 2 is associated with susceptibility to congenital hypothyroidism [14]. Additionally, some studies have demonstrated that congenital hypothyroidism is caused by various genetic alterations of chromosome 2p (2p12-2pter), which carry a defective thyroid peroxidase (TPO) [15,16]. However, no known pathologic variants are currently associated with TPO in the 2p15p16.1 region. Further investigation is required for this phenotype.

According to the SysID database (https://www.sysid.dbmr.unibe.ch/), there are currently 1500 primary and 1248 candidate ID genes [18]. ID-associated genes are enriched for those involved in chromatin remodeling and transcriptional regulation, and the BRG1/BRM-associated factor (BAF) chromatin remodeling complex accounts for over 1% of ID cases [19]. Additionally, mutations in the gene have been identified in some patients with ID [19].

(B cell leukemia/lymphoma 11A) gene, BAF chromatin remodeling complex subunit , encodes a C2H2-type zinc-finger protein that is highly expressed in the germinal center of B lymphocytes as well as the fetal brain, especially in the cortex, caudate, hippocampus, and putamen [20,21]. may play a role in lymphoid malignancy and hematopoiesis by acting as a transcriptional repressor in B cells and regulating primary adult erythroid cells, respectively. BCL11A may also play a critical role in neural development, including axonal branching and neurite outgrowth [7]. Additionally, the hereditary persistence of fetal hemoglobin has been identified in patients with ID syndrome with mutation [19].

Korenke et al. [22] presented a case of a 13-year-old boy with a novel frameshift deletion in the gene. The patient had well-controlled epilepsy, ID syndrome, and severe language delay. His epilepsy gene panel revealed heterozygous variants in 2 genes, and , encompassing the exon of the gene. Yoshida et al. [23] also reported a haploinsufficiency of the gene, which shares major physical features of ID syndrome and intractable epileptic components. Our patient showed abnormal EEG, but no epileptic phenotype was detected.

The (poly (A) polymerase, gamma) gene encodes an enzyme that adenylates small RNAs at their 3’ ends, activating endonucleolytic cleavage, the first step of polyadenylation [24]. This gene is expressed in multiple regions of the brain and is involved in basic cellular processing associated with ID [6]. The (Rel protooncogene, NF-κB subunit) gene encodes c-Rel, a transcription factor of the Rel/NF-κB family responsible for T and B cell function in the immune system [25]. also plays a role in memory and synaptic plasticity [6].

Hancarova et al. [6] reported a patient with a 0.45 Mb deletion of 2p16.1, which contained the , , and genes. This case is highly similar to our patient in terms of locus, defect size, and accompanying genes. At the age of 6 months, she was referred to a geneticist for delayed psychomotor development. The patient displayed microcephaly, facial asymmetry, mild ptosis, telecanthus, strabismus, a wide distance between nipples, hypotonia, growth retardation, and autistic features. Her clinical features gradually progressed and worsened with age. The brain MRI was normal, but the EEG showed abnormal activity.

Lévy et al. [5] studied three patients with the 2p15-p16.1 microdeletion. Patients 1 and 2 had 2p15 microdeletion, whereas patient 3 had 2p16.1 microdeletion. Patient 1 had a 183 kb deletion at 2p15, encompassing the , , and genes. The patient miscarried at 34+2 weeks, revealing a short, thin corpus callosum and a short supratentorial measurement. The fetal autopsy revealed hypertelorism, a bulging philtrum, anteverted nostrils, and retrognathia. Patient 2 had an interstitial deletion at 2p15, encompassing , , and genes. The patient had a motor delay, feeding difficulty with lactose intolerance, extensive eczema, a large fontanelle, hypertelorism, mild ptosis, a long smooth philtrum, hyperopia, and astigmatism. Brain MRI showed multiple brain malformations, including agenesis of the corpus callosum, the fusion of lateral ventricles, thalami, and hydrocephalus. Patient 3 had an interstitial deletion at 2p16.1, encompassing and genes. He had feeding difficulties due to gastroestophageal reflux at the age of 2 months, hyperlaxity of large joints, developmental delay, and autism spectrum disorder at the age of 4. The brain MRI at 18 months and 4 years showed enlarged lateral ventricles, cortical and subcortical atrophy, and mild cerebellar atrophy. EEG was normal.

In conclusion, we identified a novel, de novo 2p15p16.1 microdeletion in a male infant with ID, dysmorphology, and developmental delay. This is the first case in Korea. To clarify the relationship between involved genes and clinical phenotypes in 15p16.1 microdeletion syndrome, additional patients must be identified using microarrays, and further functional studies must be performed.

We thank the patient and his parents for their cooperation. This work was not supported by any funds. 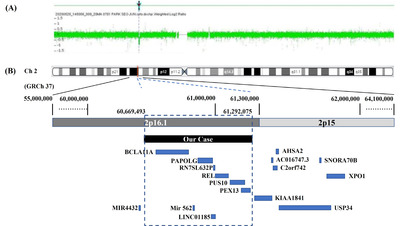