Human sex differentiation from bipotential gonads to testes or ovaries is a complex process involving the interaction of several genes [1,2]. In XY embryos, the expression of sex-determining region Y () initiates a cascade of testicular formation pathways via the upregulation of SRY-box-9 (), followed by other family members, including SRY-box-3 (), SRY-box-8 (), and SRY-box-10 () [1-3]. In XX embryos, in the absence of , pro-ovarian factors, such as Wnt family member 4 () and R-spondin 1 () stabilize β-catenin and antagonize , resulting in ovarian differentiation [2,3].

46,XX testicular or ovotesticular disorders of sex development (DSD) is a rare condition with a prevalence of approximately 1 per 20,000 newborn males [4]. Approximately 80-90% of these cases are caused by translocation of the allele onto the X chromosome, known as -positive [5]. Testicular development may also occur in -negative conditions and is caused by increased expression of pro-testis genes or insufficient expression of pro-ovarian genes [1,3,6]. -negative (ovo)testicular DSD has been reported in XX individuals with duplications of , , and [2]. In addition, loss-of-function variants of and have been identified in a few individuals with syndromic 46,XX (ovo)testicular DSD [2].

Nuclear receptor subfamily 5 group A member 1 (), also known as steroidogenic factor-1 (SF1), is a nuclear receptor transcription factor that regulates adrenal and reproductive development [7]. NR5A1 mediates the initial step of gonadal development in both XY and XX embryos [2,7]. It upregulates synergistically with SRY in XY embryos, and induces and expression in XX embryos [2-4]. Loss-of-function variants of have been characterized in 46,XY DSD, gonadal dysgenesis and 46,XX primary ovarian insufficiency [2,3,7]. The case of 46,XY female who carried a missense variant of c.205C>G; p.R68G in has been reported in Korea [8]. Recently, six reports have described a missense variant of (c.274C>T; p.Arg92Trp) as the cause of 46,XX (ovo)testicular DSD [9-14] in 15 patients. Additional variants, c.275G>A; p.Arg92Gln and c.779C>T; p.Ala260Val, have also been reported in 46,XX individuals with (ovo)testicular DSD [12,15].

Herein, we report the rare Korean case of 46,XX testicular DSD with a heterozygous p.Arg92Trp variant, which presented with a small penis, bifid scrotum, and bilateral undescended testes.

A 27-month-old male was referred to the Seoul National University Hospital for evaluation of microphallus and small testicular size. He was the first child in dichorionic diamniotic twins of non-consanguineous healthy parents and was born through fertilization. On physical examination, his height, weight, and head circumference were 84.6 cm (6th percentile), 11 kg (10th percentile), and 44 cm (<3rd percentile), respectively. The patient had normal developmental milestones. He presented with male-type external genitalia with a micropenis, bifid scrotum, and bilateral undescended testes. Pelvic ultrasonography and magnetic resonance imaging showed bilateral normally shaped testes and epididymis in both supra-scrotal areas, and no uterus, ovary, or vagina was detected (Fig. 1). His gonadotropin levels were comparable to those of age- and sex-matched healthy controls: luteinizing hormone 0.07 mIU/mL and follicle stimulating hormone 0.03 mIU/mL. A proper testosterone response was observed after three days of stimulation with human chorionic gonadotropin (basal 0.02 ng/dL, peak 0.23 ng/dL). He underwent bilateral scrotal orchiopexy and scrotoplasty at the age of 2 years and 5 months. He also underwent testosterone replacement because of a small penis immediately after surgery (once at 4.8 years old) and later during childhood (four times during 8.1 and 9.0 years old) at the pediatric urology clinic. At the latest visit (at 9.2 years old), he showed an adequately sized penis, with a stretched penile length of 5 cm.

The research protocol was approved by the Institutional Review Board of Seoul National University Hospital (IRB no. 2206-190-1336). Written informed consent for genetic analysis was obtained from the parents of the patient.

Chromosome analysis of peripheral blood leukocytes revealed a 46,XX karyotype. Fluorescence hybridization with an -specific probe excluded translocations on one X chromosome. Duplication of was ruled out using real-time PCR assay. After a diagnosis of 46,XX (-negative) testicular DSD, chromosome analysis of peripheral blood leukocytes from his younger twin sibling with a female phenotype was performed and revealed a normal female karyotype (46,XX). Considering the possible confined blood chimerism that can occur in diamniotic twins sharing a common placenta [16], short tandem repeat (STR) polymorphism analysis was performed. Skin fibroblasts of the proband and blood leukocytes from younger siblings and both parents were used to confirm the dizygosity of the twins. The twins were determined as dizygotic because of the nine discordant genotypes among the 16 STR markers. In the proband, karyotyping using skin fibroblasts also revealed 46,XX, and the patterns of all 16 STR markers were identical between the skin and peripheral blood samples, ruling out the possibility of mosaicism.

Whole exome sequencing was subsequently performed, and a previously reported heterozygous missense variant of (c.274C>T, p.Arg92Trp) was identified as the best candidate for the patient’s phenotype (likely pathogenic, PM1+PM2+PP3+PP4+PP5). There were no other pathogenic or likely pathogenic variants of sex differentiation-related genes, including , , , and . Genetic analysis was also performed on his parents, and the parents did not harbor this variant, indicating his variant as .

Human gonads are bipotential until about six weeks of gestation, then differentiate into testes or ovaries [1,2]. In developing testes, leads to the upregulation of and subsequent stimulation of testis-specific pathways. During normal ovarian development, ovary-specific genes, such as and , modulate ovary-specific signaling pathways via β-catenin by antagonizing , and represses the -induced transactivation of (Fig. 2) [1-3]. Dysregulation of these delicately balanced processes of testicular and ovarian differentiation can induce 46,XX (ovo)testicular DSD [4,10]. In the absence of , gain-of-function variants of pro-testicular genes, such as , , and , or loss-of-function variants of pro-ovarian genes, such as , , and , can lead to -negative 46,XX sex reversal [1,10].


Several studies have suggested that the p.Arg92Trp variant activates testis development in the XX background. Human is expressed in ovarian somatic cells and can regulate cell fate at an early stage [9]. analysis predicted that the p.Arg92Trp variant affects a highly conserved amino acid in the RGGR motif of the A-box, involving DNA-binding specificity and stability [9-11]. The p.Arg92Trp variant showed reduced ability to upregulate and reduced synergy with β-catenin, resulting in reduced activation of the pro-ovary canonical WNT/RSPO1 signaling pathway [9,10]. In vitro assays demonstrated that the p.Arg92Trp variant was less reactive to [11]. In addition, the variant caused increased repression of ovarian-specific WNT/β-catenin signaling, resulting in reduced expression and decreased testis pathway inhibition [12]. Although the exact pathophysiology of variants causing 46,XX sex reversal has not been clearly elucidated, these findings provide evidence that is involved in sex differentiation and its variants lead to testis differentiation in the XX gonad.

To the best of our knowledge, this is the first report of a Korean patient with 46,XX testicular DSD caused by a heterozygous p.Arg92Trp variant, although there has been a previous case report of 46,XY DSD with variant in Korea [8]. Our case report can be additional evidence that is involved in a series of gonadal development processes from bipotential gonads. gene variants need to be considered as important causative factors of -negative non-syndromic 46,XX testicular DSD. Further investigations are necessary to demonstrate the exact molecular mechanism of variants in the development of 46,XX (ovo)testicular DSD. 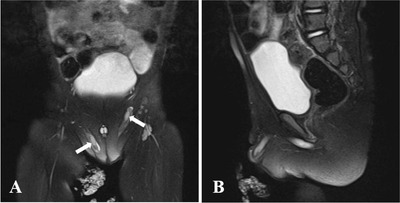 Fig. 1. T2-weighted magnetic resonance imaging of the pelvis. Coronal (A) and sagittal (B) images showing bilateral normally shaped testes (white arrows) and epididymis in both supra-scrotal areas without any evidence of female genital organs.

Fig. 2. Genetic pathway of human sex differentiation. The bipotential gonad may differentiate into the testis or ovary, depending on the delicately balanced expression of the genes involved in testicular and ovarian differentiation. upregulates and stimulates testis-specific pathways subsequently. In the absence of , ovary-specific genes, such as and , stimulate downstream signaling pathways via β-catenin and FOXL2. , sex-determining region Y; , Nuclear receptor subfamily 5 group A member 1; AMH, anti-mullerian hormone.